How to Watch: ESPN+

Josh Taylor moved his professional boxing record to 18-0 on May 22 of this year when he defeated Jose Ramirez via unanimous decision. More important than keeping his perfect record intact was the fact that the victory made the 31-year-old Scottish fighter the undisputed world junior welterweight champion. On February 26, 2022, Taylor puts his undisputed title — and unblemished record — on the line when he faces 28-year-old English fighter Jack Catterall. Catterall has a perfect 26-0 and is coming off a November 2020 win over Abderrazak Houya.

Taylor enters the fight as the No. 5 ranked fighter in boxing, according to “The Ring” Magazine pound-for-pound rankings. Catterall is unranked according to the “Bible of Boxing.”

Before we dig into the Taylor vs. Catterall bout, check out the betting sites that have the best sign-up bonuses and be sure to look at the best boxing betting sites.

This fight is an enormous step up in competition for Catterall. He has never faced someone as good as Taylor. The challenger has nothing to lose. Catterall has power and poise in the boxing ring, but he is coming off a lengthy layoff and facing someone like Taylor is a huge ask.

Taylor has advantages in height and reach in this bout and high-level experience and power. I think he is 100 percent committed to this fight. The champ bowed out of the original date for this bout, December 18, to better recover from a knee injury. If he was taking the title defense lightly, Taylor could have fought then. Instead, he sees this homecoming contest as a way to launch himself to bigger and better things. I think he does that and I think he scores the knockout in this one.

Taylor’s first defense of his undisputed crown comes in front of a hometown crowd. The last time Taylor fought in Scotland was in May 2019 when he scored a decision win over Ivan Baranchyk. Expect the champ to get a robust welcome home for this matchup. Also expect that reception to provide him with a huge emotional boost.

The one danger in this fight for Taylor is for him to look too far ahead. Taylor has acknowledged this fight could be a launching point for a run at welterweight against opponents who could provide him with more lucrative paydays. 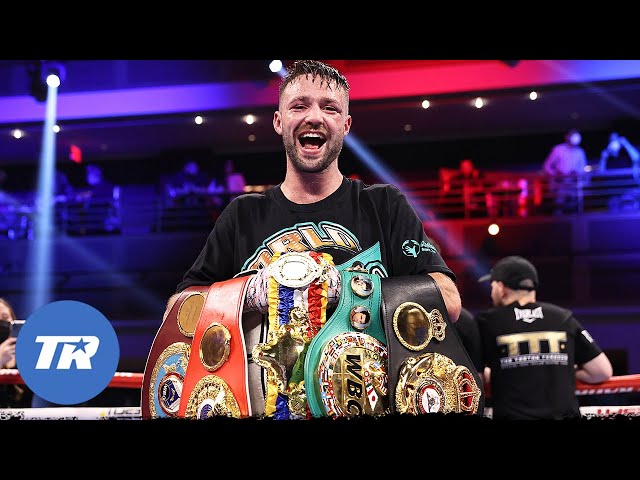 What’s on the line?

If Taylor defeats Catterall, a move to welterweight to face the likes of Yordenis Ugas (WBA welterweight champ), Terence Crawford (WBO champ) and Errol Spence Jr. (IBF and WBC champ), could open up for him. This fight could kick open a lot of doors for Taylor.