Silva, whose final seven years in the UFC saw him put together a 1-7-0-1 run, returned to the boxing ring for the first time in nearly 16 years when he faced Julio Cesar Chavez Jr. in June. Silva, who had a professional boxing record of 1-1 going into that matchup, defeated Chavez via split decision in an eight-round matchup.

Ortiz, who has not competed as a professional boxer, has not fought in MMA since 2019. Ortiz has a record of 3-0 in MMA since 2017, but his level of competition pales in comparison to that of Silva’s in those final three outings.

The Triller Fight Club card on September 11 is headlined by a matchup between boxing legend Oscar De La Hoya and another former UFC champion, Vitor Belfort.

Silva was a significant underdog to Chavez ahead of their matchup in June. but not only did the former UFC champion look good against the son of a boxing legend, he won the contest via split decision.

Silva drew rave reviews for his performance against Chavez. The former UFC champion had long desired a return to the boxing ring, but he was unable to make that happen while he was under contract with the UFC. The 46-year-old clearly wanted to show that he was serious about his move to boxing against Chavez. He accomplished that mission and with that win he set himself up for more boxing scraps.

I’m not sure anyone saw a matchup with Ortiz as the follow-up for his win over Chavez, but that’s the fight Silva accepted. If Silva trains as hard as he did for the Chavez bout and matches that intensity inside the ring he shouldn’t have a problem in beating Ortiz in a straight boxing fight.

The odds in this fight are highly in favor of Silva. There are two reasons for that. First, he was always one of the best strikers in MMA, and second, Ortiz was never known as a striker as his background was in wrestling. However, that doesn’t mean Ortiz shouldn’t be considered when betting on this fight. Silva’s personality and ego could make Ortiz a live underdog.

Silva has a tendency to clown around when he feels he has an advantage over another fighter. That ability made him one of the most frustrating fighters to face in his heyday. His brain worked like a computer and once he figured out his angles, he could make even the best opponent look foolish. His mind didn’t keep up with his reflexes as he aged and that cost him the UFC title against Chris Weidman. If Silva gives Ortiz, who isn’t the best striker, an opportunity, he could find himself on the losing end of this fight. That’s a big could. I don’t see that happening.

I don’t see much value in Silva as a pick to win at -500, but it might be worth putting something down on Silva to win in a specific manner or to go with the number of rounds. I think Ortiz lasts the fight out, but I see Silva winning via decision.

Prediction: Silva via decision -500 via BetOnline.

Anderson Silva TO WIN BY DECISION

Silva has a big edge in boxing skills in this matchup. That edge will be enhanced by the fact that the bout is taking place at 195 pounds. Ortiz has said he has not hit that mark since he was in college. The weight cut is likely to deplete Ortiz’s cardio as well as some of his strength.

TALE OF THE TAPE: SILVA vs. ORTIZ

If Silva wants to continue to compete in lucrative and competitive boxing matches, he needs an impressive win over Ortiz. Anything less than a dominant victory for the 46-year-old Brazilian will be a setback.

With this being Ortiz’s first professional boxing match, an upset win over Silva could serve to open up a lot of doors for Ortiz in the boxing world. 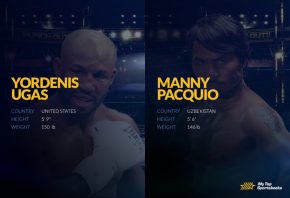