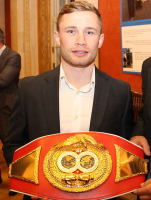 Leo “El Torrente” Santa Cruz (32-1-1) won’t have to wait long to avenge the first loss of his career. After being upset by Carl “the Jackal” Frampton (23-0-0) in July, the former WBA featherweight champ will have the chance to get his belt back in a rematch on January 28th, 2017, at the MGM Grand in Las Vegas.

Cruz was favored in the first fight for several reasons: Frampton was making his first foray into the featherweight division; Cruz had the reach and experience advantage; and El Torrente was also expected to be the more powerful puncher, controlling the ring with his size and the threat of a KO (18 of his 32 wins have come by knockout of some variety.)

He criticized Frampton’s chin ahead of the bout, seemingly predicting that he would put the challenger on the canvas.

Frampton came out fists-a-fury, pushing Santa Cruz onto the ropes early and often with power punches. The champ, meanwhile, was content to throw volume early without doing much damage.

Santa Cruz found his footing as the fight progressed, controlling some of the later rounds (especially the sixth and seventh) and connecting with more powerful shots. But it wasn’t enough to comeback from the early deficit. Frampton ended up taking a majority decision, with two judges declaring him the winner (117-111, 116-112) and one seeing it as a draw (114-114).

The rematch should be another phenomenal, back-and-forth bout. The first one proved that the fighters’ styles complement each other well, from a fan-perspective. That said, Santa Cruz will likely come in with a slightly different game plan.

Once confident that his power would overwhelm the Northern Irishman, Santa Cruz has to be doubting any perceived strength advantage now. He connected with several power shots later in the first fight, but they didn’t seem to have a lasting impact on Frampton. Meanwhile, Frampton’s power shots were able to move Santa Cruz onto the ropes, even when they weren’t connecting cleanly.

If Santa Cruz is smart, he’ll lean more heavily on his seven-inch reach advantage in the rematch, staying out of Frampton’s power-punching radius. Santa Cruz is a very technically sound boxer and has the speed and footwork to pull that off, as long as he stays disciplined.

The Mexican likely won’t have to face such a partial crowd again in January, either. We were expecting a strong Latino contingent at the Barclays Center in the first fight, but the crowd was dominated by Northern Irish fight fans pulling for Frampton. I’m sure Ulster will once again be well represented at the MGM Grand come January, but boxing is a way of life in Mexico; Santa Cruz should have his share of supporters as well, which can count for a lot in a fight that’s destined for the cards.

In terms of value, I like Santa Cruz as a modest underdog. He won’t be surprised by Frampton’s power this time out, and he won’t have false confidence in his own. He’ll craft a more appropriate game-plan and employ it from the outset, controlling the rematch the way he controlled some of the latter portions of the first fight.