A post in the subreddit r/LosAngeles from 2012 asks: “Want to run with Manny Pacquiao? Just show up to Griffith Park at 5 AM.”

The user athleteslivehere didn’t write anything else, just added this video:

That’s interesting! I wonder if that’s still possible? I’d love to go for a run with the only eight-division World Champion in the history of boxing. I wouldn’t even mind the early hour.

But that Reddit post is from 2012, nine years ago… Do you think I’m too late to join the pack?

And also, how long exactly has this thing been going on?

“Want to run with Manny Pacquiao? Just show up to Griffith Park at 5 AM.”

PS: Can everybody who found the guy in the video annoying af touch fists in friendship, please?

Pacquiao had a very productive start for his boxing career in the Phillippines; he fought 30 times between 1995 and 2000, winning 28. His only two fights outside his native Phillippines by that time were in Japan and Thailand.

Then in 2001, Pacquiao received a gift from the boxing gods: despite being third on the challenger list, PacMan secured a fight against the reigning World Champion, Lehlo Ledwaba, in what would be the tiny boxers first fight in the United States. 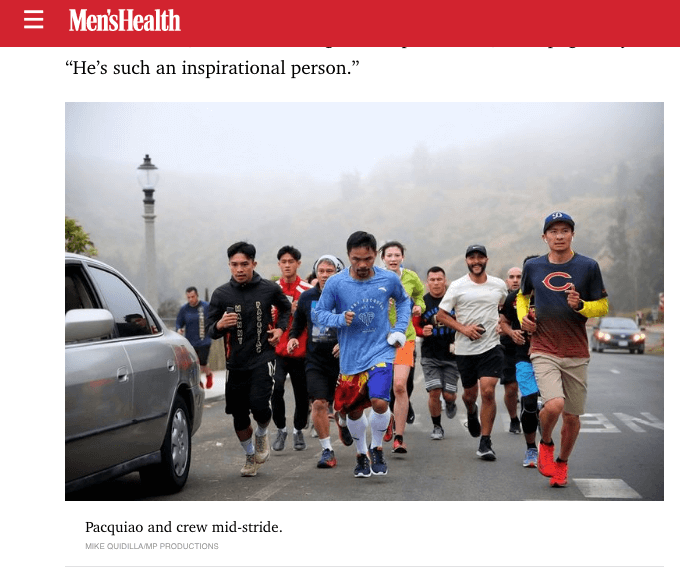 Men’sHealth.com interviewed PacMan in 2019, getting ready to fight the undisputed champion Kevin Thurman, and reported that running at Griffith Park has been a staple for him since that Ledwaba fight.

“Surrounded by a group of his friends and training partners, the Filpino fighter and senator sits in a Cadillac Escalade as it drives off to nearby Griffith Park. Pacquiao has run over a thousand miles in the scenic mountains that overlook Tinseltown, making it his go-to course whenever he’s trained for a fight in L.A. since he first arrived to America in 2001.”

The preparation in Griffith Park clearly worked in 2001 (and long after that) – Pacquiao snatched his first World Title from Ledwaba and has done it in seven other weight classes by 2021. It’s worth mentioning again that nobody else in the world has ever done that before or since. 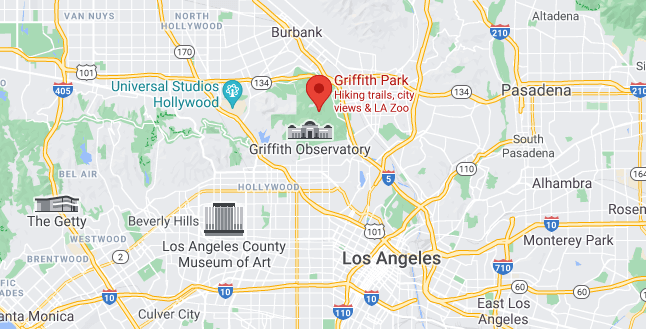 By the way, the Men’s Health reporter, Manouk Akopyan, wrote that Pacquiao was “penciled” to lose the 2019 fight against “undefeated American champion ten years his junior”, using the same arguments writers in 2021 are using to predict that PacMan will lose to Errol Spence Jr in August: he’s too old and hasn’t fought in a while, the other guy will be faster than him, it’s all over for Manny.

Ok, if PacMan has been doing this for close to 20 years, there must be a lot of evidence floating around the web.

I haven’t found any early footage of him running, but that might be because it was the early 2000s and the biggest websites in the world were Yahoo, AOL and MSN. Youtube was launched in 2006 and only became a global household name in the early 2010s.

Content warning: This video can be disappointing if you are here for the running.

The next video gives out a strong DYI gangsta rap video vibe – something many of the other videos share too.

However, this next one is just people sitting around watching Pacquiao doing abs, still in Griffith Park.

To be completely honest, it’s pretty hard to confirm that the park in the video is indeed Griffith Park, just saying you know, in the light of full transparency.

2012 – Want to run with Manny Pacquiao? Just show up to Griffith Park at 5 AM posted on Reddit 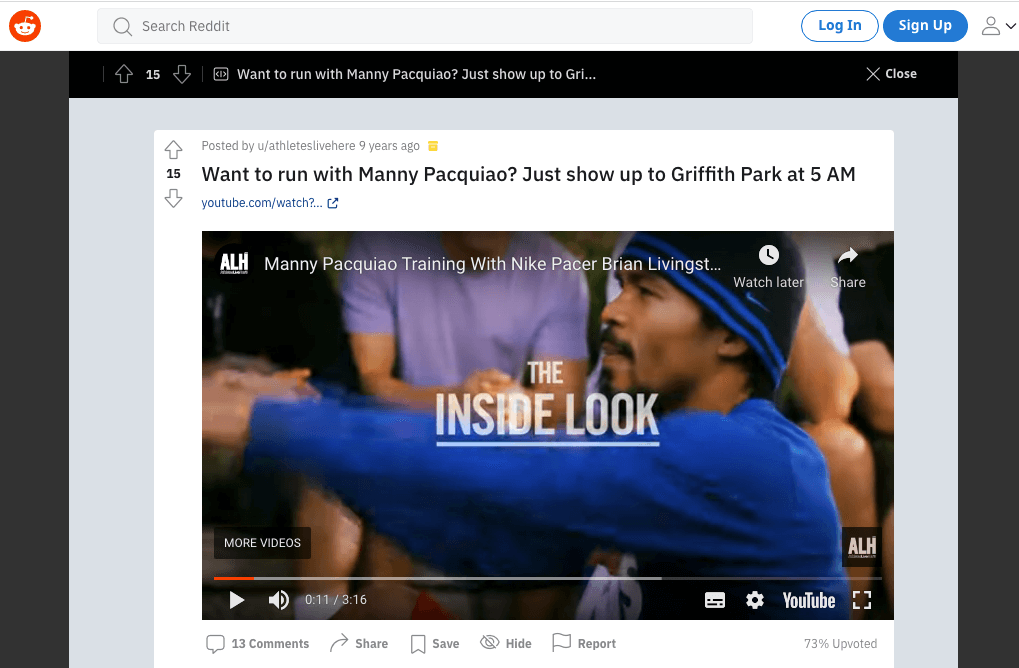 So by 2012, it’s already common knowledge in Reddit that this is happening.

Look who’s there on the video.

Plus his dog Pacman has joined the crew.

The next video’s loooong lens is the best paparazzi work in a while.

The pack looks like a presidential motorcade being shot from a news helicopter.

The runner from the Reddit post is there too. I bet PacMan blamed him for the results of his 2012 fights (a split decision loss to Timothy Bradley Jr and a KO loss to Juan Manuel Marquez)

2013 – No videos of Pacman Running in Griffith Park

Manny is back. Guess if the running partner is too?

Let’s all say ‘goodbye‘ to the friendly fist guy.

2015 – Training for the Mayweather fight

Here the online version of the British newspaper Daily Mail reports that Pacquiao “takes his training to the great outdoors as he jogs around Griffith Park” – something that he has been doing for 14 years by this point. Better late than never, Mail Online. 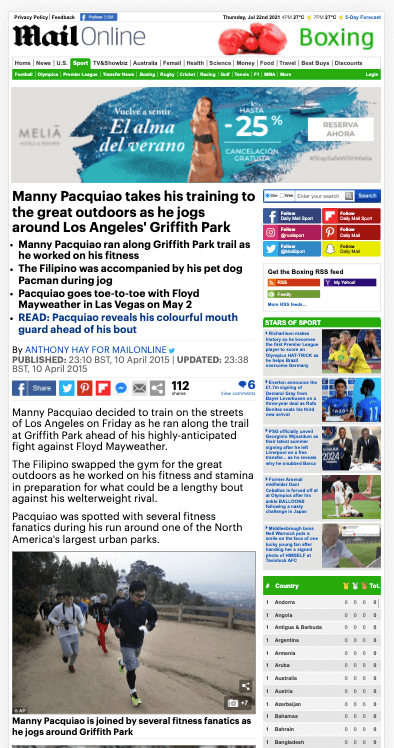 A similar story can be found in many other English-speaking newspapers a couple of weeks before any PacMan fight.

Here he is only doing abs surrounded by people again.

The long lens guy is back, this time off-road.

He’s not quite Forrest Gump, but the vibe is starting to be there.

Take a comfortable position, the next one is a longer one (only the first half is running though).

If you want to see something else that is famous, jump to 21:51 for the Hollywood sign!

This is the first one that actually looks like it’s early.

My man, these abs workouts are plenty published.

No fights in the US.

Even the Manila Times started their 2019 preview for Pacquiao vs Thurman from Griffith Park. 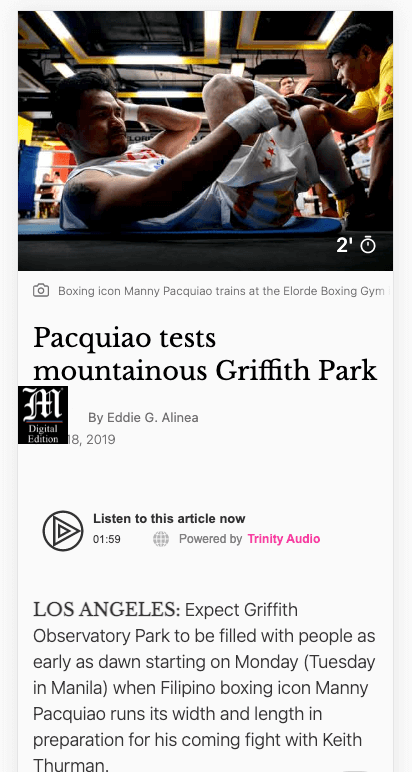 “I’m again excited to run at Griffith, a place where I always get additional strength when I fight big in the US,” Pacquiao said on Saturday upon his arrival here following a long 13-hour flight from Manila.”

You know that we are starting to get closer to the 2020s from the first beats of that dystopian background music!

PacMan is back! And it looks like sports journalists are not believing in him this time either. This one is from CBS Sports:

Not only is the fight expected to be a PPV blockbuster, the challenge is a formidable one for the underdog Pacquiao considering his age and inactivity, offering equal amounts of danger and reward for a historically great fighter who stubbornly won’t stop challenging himself.

The voiceover guy gives all the deets for the upcoming Spence vs Pacquiao fight. above

This is starting to look more like a Sunday brunch-type event with beats and shit. It was supposed to be 5 AM!!!

What are people saying about Pacquiao vs Spence?

Keith Thurman, who PacMan beat in 2019 to prove MH writer Manouk Akopyan wrong, thinks age has finally caught up with the legend:

“We’re gonna be there live, I gotta see how EJ looking, man,” Thurman said about Pacquiao-Spence. “I think (Spence) got what it takes. I saw some mitt work from PacMan — he look a little slower this camp, I ain’t gonna lie. We all know he a lil’ older, he looking a lil’ slower, but I hope he give Errol something good, you know…we all want to see that chin get touched.”

Mike Tyson said (sitting on a sofa, holding a blunt):

“I think Pacquiao, he beat Keith Thurman. Pac can move and shit, and that can mess you up, that’s what fucks everybody up, he’s all over the place.’”

Not only is Pac Man back, he is still coached by Freddie Roach!

“Manny lives for the challenge and the competition.  Manny loves hearing that the Las Vegas odds and the media favor Errol Spence,”

Pacquiao is training with some younger guns

He’s sharp, sharp first day. I predict a decision win over Spence, possibly a knock out!

“Manny has a very awkward style to fight because his punches come from all directions. He has fast and heavy hands and he throws punches in bunches.

The PacMan run at Griffith Park is becoming a rite of passage for up-and-coming boxers. Young Philippino boxer Eumir Marcial went for the run on his first morning in the US.

I’m guessing this is what it looked like back in 2001 when Pacquiao was running in Griffith Park the first time too.

See you at Griffith Park tomorrow morning at 5 AM!