The delayed Paris-Roubaix cycling race takes place this weekend, with the world’s top racers competing on the famous cobbled sectors.

It’s just a week since the 2021 World Road Race Championships, so we really are being treated to some top-class events at this late stage of the cycling season.

Paris-Roubaix is usually held in the early part of the season, but due to the Covid pandemic, it’s being held at this late stage of the year.

Cyclists are conditioned to peak at certain stages of the season to target certain races.

But I don’t believe that having this race outside of the ‘Cobbled Classics Season’ will diminish the race or dilute the quality in any way.

As you can see in the betting, all the big names are here.

So, let’s now have a closer look at some of the favorites to win the race, and bring you our cycling picks!

The Belgian rider was both the home, and sportsbook’s favorite in last weekend’s World Championship race in Flanders.

Riding in his national colors, as opposed to his Jumbo-Visma team jersey, Wout Van Aert could only manage 11th place.

Britain’s Tom Pidcock has since stated that Van Aert was never in with a chance given his team’s tactics and the pressure put on them by the home crowd.

Could Paris-Roubaix be a consolation prize for Van Aert?

He has none of that pressure on his shoulders this week, and will instead be looked after by his Jumbo-Visma teammates, rather than the Belgian national team.

With odds of +330, I feel there is little value in betting on Van Aert outright or each way.

For me, the Belgian is too short, and is a no bet!

One of the favorites with sportsbooks, van der Poel could only manage an eighth-place finish, 1 minute and 18 seconds down on the winner.

In fact, van der Poel wasn’t even the highest placed Dutchman, that accolade went to Dylan van Baarle who picked up the silver medal.

Although eighth place might seem disappointing to a rider with aspirations to win, it’s not a bad finish. And it shows that van der Poel is in reasonable form and in the mix to win.

Already this season van der Poel has won the 2021 Strade Bianche back in March, and he also picked up a stage win in this year’s Tour de France!

Classic specialist Mads Pedersen won the Kuurne–Brussels–Kuurne back in February this year but has had a quiet season since.

He did also win a stage in the Tour of Norway in August, so has shown small signs of a return to form.

Still only young in cycling terms at the age of 25, Pedersen is a man with time on his side.

I don’t see it being this weekend he comes good, but it will happen one day soon.

Now we’re getting into the value riders. Peter Sagan is a man born for the one-day classics.

The Slovakian rider has won no less than three world championships and this race back in 2018.

In this year’s world championship, Sagan never looked like adding a fourth title to his impressive collection of wins. Sagan finished in 26th position, which was 6 mins and 27 seconds behind the winner.

The problem is that’s he’s one of those capable riders who you write off at your peril. But I’m still giving him a wide berth due to recent form.

22-year-old Tom Pidcock has just completed an impressive world championship last weekend, finishing 6th overall, and doing a lot of work on his own.

With the support of Ineos Grenadiers behind him this week, Pidcock has to be considered a serious contender to win.

I think from what I saw last week, Pidcock will be well up to win this race and is worth an each-way bet at +1800.

What can we say about this man?

In the face of a hostile Belgian crowd last weekend, Alaphilippe escaped from his breakaway group in the final few kilometers of the race to win his second road world championship in two years.

Will he be up for this race the week after such a victory? You bet he will.

Last season following his first world championship win, the Frenchman had his arms aloft crossing the line to win the Liege-Bastogne-Liege classic…. or so he thought!

Unknown to Alaphilippe, he went early with his celebration and was caught on the line by Primoz Roglic.

To add further insult to injury, Alaphilippe was then demoted down further places for an infringement.

The point is, Alaphilippe was still hungry for more. And that makes him another great each-way pick for the Paris-Roubaix at +2500.

With there only being such a huge field in cycling classic races, I would strongly recommend using betting bonuses on these picks.

These sorts of picks can be a bit like a lottery, hence choosing more than one pick. So if you’re using cash, bet wisely! 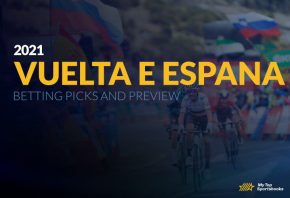