The second of a four game series between the Red Sox and the New York Yankees will go underway this Friday at 7:05 PM ET, when CC Sabathia and Jon Lester take the mountain at the Yankees stadium. 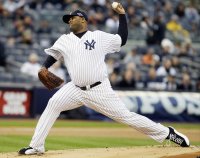 Sabathia is 1-1 this season with a 7.50 ERA with 12 innings pitched, 15 hits allowed, and 10 runs in two starts. He won his last game against the Toronto Blue Jays with a 6-4 result. “He was down in the zone, his ball was sinking like it was supposed to, his changeup was good, his slider was good,” Yankees manager Joe Girardi said. “I was encouraged.”

Lester is 0-2 in two starts this season; he threw 14 innings, allows 13 hits and six runs.  Lester’s two losses came against Baltimore and most recently against Milwaukee. “I know our hitters are up there grinding out at-bats,” Lester said, “The effort’s there. Obviously, they don’t want to not get any runs on the board.”

The Yankees beat the Red Sox in the first game of the series on Thursday. The MLB odds listed the Boston +135 and New York -155 in the money line; the game total was set at 8.5.