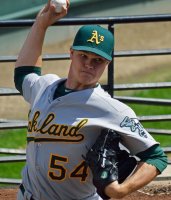 Pegged to be contenders after reaching the Wild Card game last season, the Oakland Athletics (41-50, 18-26 Home) come out of the All-Star Break at the bottom of the American League West, 8.5 games back of the Los Angeles Angels. Tonight, the A’s will look to start a second half run when they send ace Sonny Gray (10-3, 2.04 ERA) to the mound against the surprising Minnesota Twins (49-40, 18-24 Away) at O.co Coliseum (10:05 PM Eastern).

Gray won his last outing against the Indians, pitching a complete game and allowing just two hits. The A’s offense needed every ounce of Sonny’s magic, mustering just two runs, themselves. 2-0 result.  The complete game shutout was the third of Gray’s career, and he needed only 107 pitches to make it happen.

“If you’re a fan of pitching he is fun to watch,” Cleveland manager Terry Francona said after the loss, according to the Associated Press. “If you are trying to beat him it’s not fun. There’s really nothing he doesn’t do.”

Tonight, Gray will be facing a Twins team that went into the break on fire, winning three straight and six of seven.

In stark contrast to Oakland, the Twins have exceeded all pre-season expectations. Predicted to bring up the rear in the AL Central, Minnesota currently sits second in the division (4.5 games back of the Royals) and occupies the first Wild Card spot.

“We’ve gotten to a point now where it’s like, ‘OK, this is something that we can do not only for a month or two months but for a season,'” Twins manager Paul Molitor said. “Let’s make it fun. I haven’t tried to look too far out, as far as talking to these guys about the playoffs and those kinds of things, but I hear them. I feel them. They’re believing.”

Minnesota send newly returned Ervin Santana (0-0, 6.00 ERA) to the bump. In just his second start of the year, Santana gave up eight hits – including three homers – and six runs against the Detroit Tigers and was lucky to end up with a no-decision.

As far as betting on tonight’s game, the Twins are on an impressive run but they have a weak road record and will be facing one of the best pitchers in the league. Take Gray and the Athletics to start the second half with a win.