While James Harden was back at Rockets practice on Monday, the All-NBA guard is reportedly “unmoved and uninterested” in forming a new partnership with John Wall.

With Houston being put over a barrel, it’s increasingly likely that Harden ends up in Brooklyn with former teammate Kevin Durant, or in Philadelphia with former Rockets GM Darryl Morey.

Let’s check out the latest NBA championship odds and speculate which team has the best chance at knocking off the favored Lakers.

LAKERS GET EVEN BETTER

Last offseason, many pundits questioned whether the Lakers had enough depth to win the NBA championship. However, after LeBron James and Anthony Davis dominated the Orlando bubble (becoming the first pair of teammates to finish one-two in postseason scoring since Shaquille O’Neal and Kobe Bryant in 2002), it’s now clear the historic duo requires little help to rack up titles.


Back in October, we recommended Los Angeles at +400 to repeat, but their championship odds have shortened further to +210 following a productive free-agency period.

On this day in 2002, @KingJames made his national TV debut as a 17-year-old in high school.

There was never a doubt. pic.twitter.com/frZH1q5aoV

The Purple & Gold brought in both the Sixth Man of the Year, Montrezl Harrell, and the award’s runner-up, Dennis Schröder, to shore up a bench that lacked scoring. They also added veteran shooter Wesley Matthews to replace the outgoing Danny Green.

At the same time, the entire Western Conference is falling apart at the seams: Klay Thompson’s torn Achilles kills the chances for a Golden State (+1800) revival, the Clippers (+650) didn’t do much to improve outside replacing Doc Rivers with Ty Lue, and the Rockets (+4000) will soon be without Harden.

WHERE WILL HARDEN END UP?

Oddsmakers seem to believe James Harden will eventually join forces with former OKC teammate Kevin Durant in Brooklyn, listing the Nets at +550 to win the championship. While the Rockets reportedly have no interest in making a deal unless Kyrie Irving is included, there’s always a chance they fold to their star’s demands.

Durant (second), Harden (third) and Irving (ninth) are all in the top 10 in career points per game, with KD and The Beard combining to win seven of the last 11 scoring titles. This is the superteam the NBA needs to make things interesting, so let’s hope it happens.

KD and Kyrie’s first run of the season:

The 76ers are listed at +1700 to win the title, which suggests that oddsmakers don’t believe Harden will end up in the City of Brotherly Love. Even if he does, the new president of basketball operations Daryl Morey would almost certainly have to part with one of his two young All-Stars, Ben Simmons or Joel Embiid, leaving the Sixers far from title-contender status.

See below the top sportsbooks where you can wager online and choose the best one for you and remember: click here if you have any doubts on how to bet on the NBA. 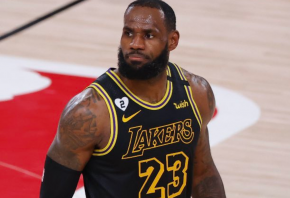