The 2022 PDC World Darts Championship will be taking place this next month at Alexandra Palace in London and many observers are curious about who will be crowned as the next world champion. This will be the 29th World Championship organized by the Professional Darts Corporation and will take place from December 15th of 2021 and end on January 3rd of 2022.

At the 2021 World Championship, Gerwyn Price was crowned the winner. Prior to that, Peter Wright was the defending champion after defeating Michael van Gerwen 7-3 in 2020 final. With a prize fund of 2.5 million British Pounds, there is a lot on the line for all competing and especially the champion as well with the winner taking home £500,000.

Confirmed date for our documentary on Wales’ 🏴󠁧󠁢󠁷󠁬󠁳󠁿 world number one @Gezzyprice and his transition from rugby 🏉 to world #darts 🎯 champion in seven years. Pleasure to interview Gerwyn over several hours for this.

Price, also known as “The Iceman”, is the defending champion after he defeated Gary Anderson 7-3 to claim his first World Championship in 2021. After winning the 2021 PDC World Darts Championship, Price became the first-ever Welshman to win the tournament. His victory also saw him overtake Michael van Gerwen in the world rankings, becoming the new world number one. Price’s rise has been fairly consistent over the years since breaking into the top 32 of the PDC Order of Merit back in 2016.

The Welshman won his first Pro Tour title in 2016 and in 2017 he was the runner-up at the UK Open, which was his first major event final. Price’s next major accomplishment came in 2018 when he won the Grand Slam of Darts tournament, albeit in a somewhat controversial fashion, and then went on to retain the title at the 2019 tournament. An imposing figure, Price also plays rugby union for Welsh Premier Division sides Neath and Cross Keys.

A dominating figure in his own right, van Gerwen has dominated the darts scene this past decade. Hailing from the Netherlands and known for throwing at a very fast pace, van Gerwen is typically able to build up momentum over his opponents in a matter of seconds. Known as “MVG”, the 32-year old is an extremely accomplished player and in 2014, at the age of 24, became the youngest winner of the PDC World Championship and is one of only five players to win the event more than once.

Van Gerwen holds a slew of other records and accolades, one of them being the highest three-dart average in a televised darts match at 123.4. Since his breakthrough in 2014, MVG has claimed the PDC World Champion title in 2017 and 2018 and is the second most successful player in PDC history, behind only Phil Taylor. That said, he has an extensive resume of major wins and victories. In 2019 alone, he broke Taylor’s record for most ProTour titles with his 71st victory and became the first player to win 30 European Tour titles. 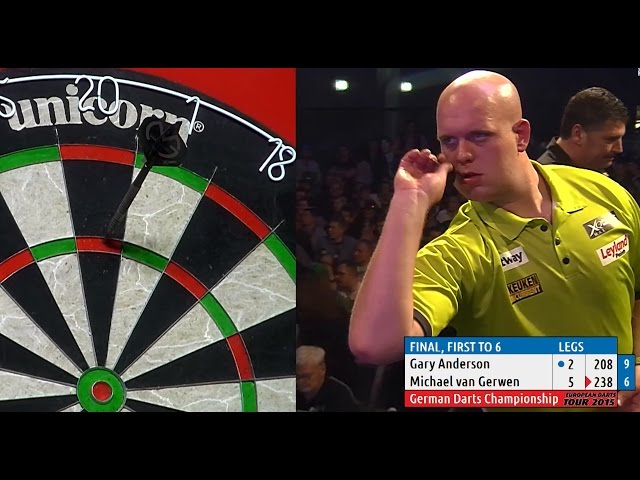 The field: Which dark horses to keep an eye on?

With two dominating figures headlining this World Championship, who else from the field might stick out as someone to keep your eye on? For starters, 2020 World Champion Peter Wright would be an intriguing option. Known for his distinctive Mohican hairstyle and his nickname, “Snakebite”, Wright is currently No. 2 on the Order of Merit and is the current World Matchplay Champion. In 2021, Wright won his first World Matchplay by beating the previous champion Dimitri Van den Bergh 18-9 in the final, and also became just the fourth player to win 30 titles on the PDC Pro Tour.

Another competitor to keep an eye on is Jonny Clayton who has had a very strong 2021. This year alone, “The Ferret” won his first televised singles title, the 2021 Masters, which would help him qualify for the 2021 Premier League Darts tournament which he also won as well. After that, Clayton won his first ranked televised title at the 2021 World Grand Prix by prevailing over Price 5-1 in the final. In fact, this year Clayton has won four TV titles, the most recent being an 11-6 victory over Van den Bergh in the World Series of Darts Finals.

Prediction: With such a stacked field, it is hard to find a decisive winner especially when it seems as though each player has an opportunity to win at any given moment. That said, it is hard to argue against Michael van Gerwen given his extensive track record and his relatively young age. Van Gerwen has the resume that stacks up against any other darts player in history and has a great chance to make even more history in December when the World Championships roll around.

When it comes to darts betting sites, you must check our best-rated online sportsbooks. It is nice to have options to make sure that your strategy is aligned correctly.

One thing to make note of when it comes to using these platforms is sign-up bonuses offered by the best bookies. When it comes to understanding which options and bonuses might be the best for you, these websites make it easy to understand what the most friendly path to wagering looks like for you. When you are finally ready to place your bets, make sure to sign up at multiple different sites so you have your pick of the litter when it comes to finding the best options and the highest bang for your buck.

If you still have any doubts, we recommend you go through our reviews, like the BetOnline review, where we give you full details about each major reliable bookie.