This far ahead of the first Saturday in May, it’s dangerous to pick horses for the 2018 Kentucky Derby. With that said, these are the big names you’re going to hear about on the Road to the Derby.

Good Magic finished a disappointing third at the Fountain of Youth, losing to an aptly-named 18/1 longshot called Promises Fulfilled. Obviously winning a G2 race isn’t the priority for Good Magic, but it would have been reassuring to see a better result.

Good Magic is a prototypical horse, and his pedigree is more or less a dream sheet. Sired by 2007 Preakness and Breeders Cup winner Curlin, and with 2007 Breeder’s Cup and Kentucky Derby runner-up Hard Spun as his damsire, it’s hard not to expect big things out of Good Magic. His big victory at the Breeders Cup Juvenile was as a long shot, Bolt d’Oro was the heavy favorite, but now Good Magic is the media favorite.

His next race will likely be at Keeneland, the Blue Grass Stakes, and that’ll be an important race to keep your eye on.

Bolt d’Oro took the world by storm in 2017, easily winning his debut at Del Mar and backing it up with another win at the Del Mar Futurity the next month. The horse then won the 2017 FrontRunner Stakes (see clip, below), and entered the Breeders’ Cup Juvenile as the heavy favorite. He took a disappointing third there, and watched Good Magic rocket to the top of the Kentucky Derby watchlists, but for the most part can’t be blamed for his loss. Sometimes a horse gets pushed out of position and has to try and run on the outside, and Bolt d’Oro tried valiantly.

Bolt d’Oro has not yet raced in 2018, but is still among the favorites to win at Churchill Downs. He’s expected to race next at the San Felipe Stakes, where he’ll meet McKinzie. 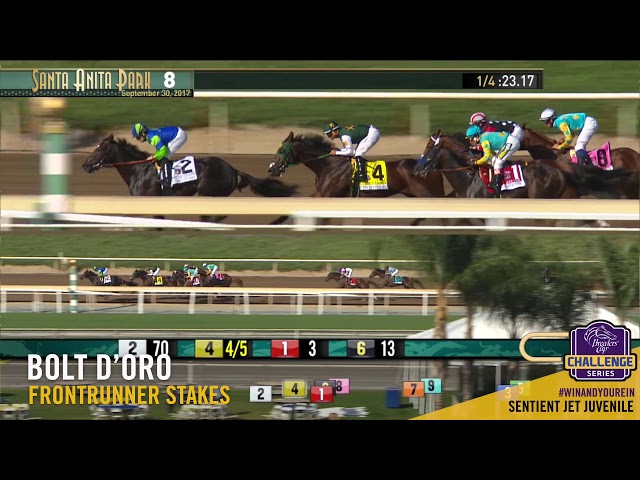 Who needs star-studded pedigree when you’re perfect through three starts? The betting favorite in the last pool of the Kentucky Derby Future Wager, listed at 8/1, has yet to officially lose a race. McKinzie was beaten on the track once, by Solomini, but Solomini was later assessed a penalty and downgraded to third.

As a three-year-old, McKinzie has delivered on his promise. Going into the Sham Stakes as a heavy 1/5 favorite, McKinzie perfectly managed the race, came home untouched, and posted a 1:36 mile.

It’ll be interesting to see where McKinzie falls in the next futures pool, due to open on the ninth of March. McKinzie hasn’t run since being listed at 8/1, and some of it’s opponents have, so that movement will be very telling.

As a Todd Pletcher-trained horse, Audible warrants some consideration in Triple Crown racing. Pletcher’s horses Super Saver and Always Dreaming won the Kentucky Derby in 2010 and 2017, respectively, and the seven-time Trainer of the Year has established himself as perhaps the best Triple Crown trainer currently working.

Audible started racing a little too green, losing to We Should Talk and Smokin Platinum at the Belmont Park maiden special weight in September of 2017. Since then, he’s evolved into an incredible racer, recording two wins at the Aqueduct and a 1:36 mile. He also defeated a strong field at the 2018 Holy Bull Stakes, beating Enticed, Tiz Mischief, and Free Drop Billy.

Audible is 3-0-1 in four starts, has earned $287,720, and was listed at 12/1 in the most recent futures pool. That the pool didn’t even include Audible in November speaks to his evolution from also-ran to contender.

Like Good Magic, Solomini is sired by Curlin, who sired the lion’s share of horses on any Kentucky Derby watchlist. Like McKinzie, Solomini is trained by Bob Baffert, who has won four Kentucky Derbies, six Preakness Stakes, two Belmonts and a Triple Crown, with American Pharoah.

Solomini showed a lot of promise finishing second to Bolt d’Oro at the FrontRunner stakes, beating Zatter and Take the One O One, and also finishing second at the 2017 Breeders’ Cup Juvenile. In that race, there was nobody to beat Good Magic, but holding off Bolt d’Oro is deeply impressive.

As we’ve mentioned before, Solomini did reach the tape first at the Los Alamitos Futurity, but had that win stripped because of an illegal contact penalty.

Solomini is a great horse, trained by one of the most accomplished trainers in history, with a good chance to contend on the trail to the Derby and at the Derby itself.

Catholic Boy received one (1) first-place vote in the Kentucky Derby Media Poll, and indication of how difficult he is to evaluate. He ran the bulk of his two-year old season on turf, finishing fourth at the Breeders’ Cup Juvenile Turf as a 12/1 longshot. He also won his debut race (in a Gulfstream Park maiden race) and the 2017 With Anticipation.

After the Breeders’ Cup, it was decided that Catholic Boy wasn’t a grass runner after all, and he was switched to turf, where he immediately excelled. Catholic Boy won his dirt debut at the 1 1/8 mile Remsen Stakes, beating Avery Island.

Catholic Boy started his 2018 season by placing second at the G3 Sam F Davis Stakes, in a race that came down to a duel in the home stretch and saw the stakes record broken.

Another Bob Baffert horse, Mourinho has famous, Kentucky-Derby-winning pedigree and absolutely blinding speed. Mourinho ran a 1:37 mile to win his three-year-old debut at the Smarty Jones at Oaklawn, winning in imperious fashion. That race was a seriously impressive, Mourinho controlled it from the very beginning and very nearly set a new race record.

Look for Mourinho at the Southwest Stakes. With his speed he could very well be a Derby contender, but his performances on the trail will tell the real story. Bob Baffert is very high on him, and has made his development a priority, but that doesn’t mean he can excel over 1 ¼ miles at Churchill Downs. Seeing how he performs at 8.5 furlongs will be important for Mourinho’s backers.