There is no better three-year-old race in the summer than the Travers Stakes. Often called the Midsummer Derby, the Travers is a 1 1/4-mile dirt race for three-year-olds that traditionally takes place at Saratoga in late August. The 2021 Travers Stakes will take place on Saturday, August 28. The race is one of the best horse races of the year and it offers one of the best purses of the year, $1.25 million.

This is the place for everything you need to know about Travers Stakes betting.

The 2021 Travers Stakes betting favorites will become clearer closest to the day of the race. However, a few weeks out from the race, the most likely favorite is Essential Quality. Trained by Brad Cox, he was the Champion Two Year Old Male of last year, and has remained in elite form this year. He suffered his only loss in the Kentucky Derby (G1), but rebounded with victories in the Belmont (G1) and Jim Dandy (G2).

Other horses likely to be well bet in the Travers include Jim Dandy second-place finisher Keepmeinmind, Haskell (G1) winner Mandaloun, Curlin Stakes winner Dynamic One, as well as Lexington Stakes (G3) winner King Fury, who plans to take his final prep on turf in the Saratoga Derby (G1).

Where to Bet the Travers Stakes Online

Now is the time to make sure you know the best place to bet the Travers Stakes online. Choosing an online sportsbook can be difficult. There are hundreds of options out there, and all of them offer different features, bonuses, and odds.

Fortunately, our betting experts have done the research. Our guide to the best online sportsbooks tells you everything you need to know about choosing a trusted sportsbook and getting the most for your betting money. Learn about your options, make an account at one or more sportsbooks that give you the features you want, and then be ready to bet the Travers Stakes online with confidence.

The Travers Stakes is one of the oldest horse races in North America. The first-ever Travers Stakes happened in 1864, three years before the first running of the Belmont Stakes. Though the race has been run at distances ranging from 1 1/8 miles to 1 3/4 miles, the race currently covers 1 1/4 miles around the Saratoga dirt.

In addition to the biggest share of the $1.25 million purse, the Travers Stakes winner is awarded other traditional spoils. He wins a blanket of red and white roses, as well as the Man O’ War Cup. The winner’s silks are also painted on a canoe in the Saratoga infield pond, as well as on a jockey statue on the Saratoga grounds.

Even though the Travers Stakes has always been run at Saratoga, in New York State, the race’s first winner back in 1864 was named after a different haven of American horse racing: his name was Kentucky.

It is only fitting that the trophy in the Travers Stakes is named the Man O’ War Cup. After all, Man O’ War himself won the race in 1920. In that race he defeated Upset, remembered to history as the only horse who ever defeated Man O’ War, a feat he accomplished in the 1919 Sanford Stakes at Saratoga.

Affirmed, the Triple Crown winner in 1978, came closer than anyone to matching Whirlaway’s feat. He crossed the wire first in the 1978 Travers. However, he was disqualified for coming in on Alydar, causing him to hit the fence and almost go down. Alydar, who had finished second behind Affirmed in all three Triple Crown races that year, was placed first after the incident.

Some of the most engaging editions of the Travers have featured all three Triple Crown race winners clashing in Saratoga. Sometimes, a new face comes and beats them all! In 1918 Kentucky Derby winner Exterminator, Preakness winner War Cloud, and Belmont winner Johren all met in the Travers, but Sun Briar emerged victorious. In 1983 it was longshot Canadian-bred Sun Briar who beat Gato Del Sol, Aloma’s Ruler, and Conquistador Cielo.

Most recently, this happened in 2017 when Always Dreaming, Cloud Computing, and Tapwrit all clashed in the Travers. However, California raider West Coast was ready to take them all down under a frontrunning ride by Mike Smith.

Possibly the most thrilling edition of the Travers Stakes happened in 1962. Two of the best horses in the country, Ridan and Jaipur, met in the race. Both had been top-class horses at both two and three. They raced in, as the chart caller from the Daily Racing Form out it, “a torrid duel” around the track. After ten furlongs,  just a nose separated the two, with Jaipur getting up to beat Ridan in track record time. 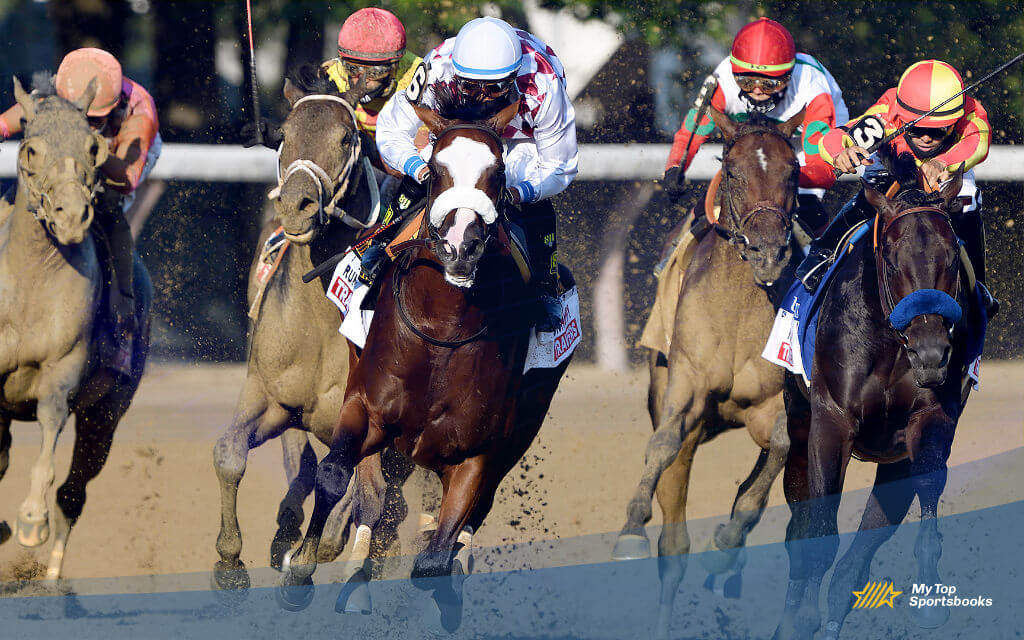 Trainer Bert Mulholland leads all trainers with five wins in the Travers. He won his first in 1939 with Eight Thirty, and his last in 1963 with Crewman.

Right on his heels with four Travers Stakes winners is the still-active Shug McGaughey. He won his first two Travers in consecutive years with Easy Goer (1989) and Rhythm (1990). He won again with Coronado’s Quest (1998), then added his fourth over twenty years later with Code of Honor (2019).

Other active jockeys who have won multiple runnings of the Travers include four-time winner Mike Smith, who most recently won the race with West Coast in 2017, and two-time winner John Velazquez, whose most recent victory came in 2019 with Code of Honor.

Once you have made your account on the top sportsbook that best fits your needs, it is time to start thinking about how to bet on the Travers Stakes.

When deciding how to bet the Travers Stakes, you can make the full range of horse racing wagers. Wagers on races at Saratoga include:

You can also bet boxes, which cover every possible combination in an exacta, trifecta, or superfecta, as well as keys, which center around one horse to finish in the top two, three, or four with another group of horses around them as possibilities. Your Travers Stakes best bet should be defined on what you think the horses’ capabilities are, compared to what prices they offer.

Saratoga also offers multi-race wagers, which require the winner to pick the winners of consecutive races. Those wagers include the Daily Double, Pick 3, Pick 4, Pick 5, and Pick 6.

There is a storied history of longshots in the Travers Stakes, and recent editions of the race have continued that legacy. Even the most impressive winner of the Travers in recent years, 2016 winner Arrogate, was a 11-1 longshot.

These are the win bet payouts in the last 15 editions of the Travers Stakes, with winning favorites marked with an asterisk:

In the last ten years, only three favorites have won the race, and that includes a favorite who only won as a dead-heat with the third-longest shot on the board.

As the Travers Stakes draws closer we will have full analysis of the race. However, if you are thinking about future wagers, there are things you can keep in mind.

First, look at prep race winners, especially local prep race winners. Even though longshots can win the Travers, and sometimes the winners come out of smaller stakes races or even allowance races, horses coming into the race in good form tend to do well.

The Jim Dandy (G2) tends to be a better predictor of the Travers than the Haskell (G1). The Jim Dandy winner has won the Travers seven times, and a win in the Jim Dandy proves that the horse is not only running well, but can run well over the Saratoga surface. Even the ungraded Curlin Stakes at Saratoga has produced a Travers winner, V. E. Day in 2014.

Place these bets and more at top oonline sportsbooks.