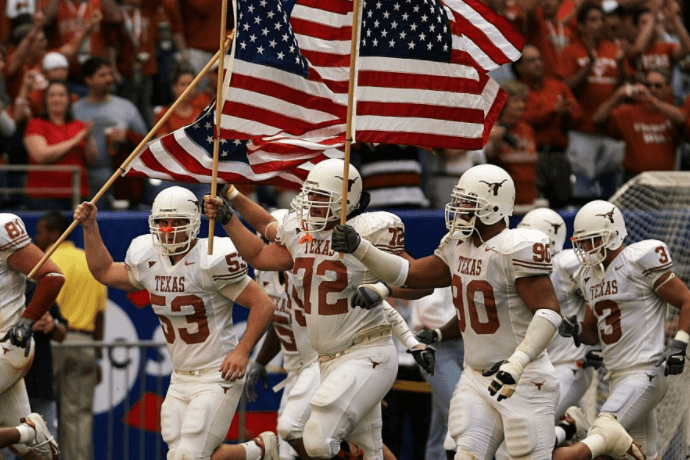 Is there anything better for football fans than the fall season? Not only is the NFL back in action, but college football gets fired back up too. Some even argue that college football is better than the pros, as it’s tough to match the passion of the fans and alumni. So, it shouldn’t be a shock that college football betting for Texas teams keeps on rising. Thus far, bettors have raced to place wagers on the several teams.

Whether you’re looking at betting on the Texas Longhorns, Texas A&M Aggies, TCU Horned Frogs or someone else, the NCAA football odds via the Las Vegas sportsbooks are always tantalizing to look at. Matter of fact, since the start of the campaign this year, we keep seeing bets for the Texas teams, and college football as a whole, really start to climb. It’s been fun to watch for everyone involved.

What’s interesting here is that sports betting is still not legal in Texas. While major advancements are trying to be made, folks simply can’t make in-person sports bets right now. That is a major bummer for the Texas citizens, as more than half of the USA states have legalized sports betting. Texas is hoping that things can change in the near future, which would of course be massive for college football fans.

For the Longhorns in particular, folks are betting on them heavily as they’re always considered among the favorites to win the Big 12. The team did unfortunately suffer a loss to Arkansas earlier this year, which has them at 3-1 on the season. However, with conference play about to really heat up, the Longhorns are no doubt in the title conversation. Don’t forget too that Texas won’t be in the conference much longer.

In case you missed it, massive breaking news arrived earlier this year, as it was announced that Texas will be leaving the Big 12 and officially joining the SEC in 2025. Texas in the SEC? This really caught plenty of folks off guard, but it’s something that people are still talking about. As you might have been able to guess, Texas’ move from the Big 12 to the SEC Will have monster betting implications.

At the same, it’s also going to be incredible for the college football oddsmakers. Think of the weeks where Texas gets ready to face the Crimson Tide? Nick Saban is without question one of the best college football coaches of all time. Each and every year, Alabama is considered a major favorite to win the National Championship. They did so last year and things are looking pretty strong again in 2021.

Texas will always be ready to do whatever is needed to try and pull off a major upset against Alabama when they play one another. This of course is always going to be easier said than done, as Alabama is always loaded with 5-star prospects from all over the country. The allure of playing for Saban is always something that’s going to stick out to the top recruits in the country. This happens each year.

With Texas making the move to the SEC, it’s also going to help their recruiting tactics for head coach Steve Sarkisian. The man known as Sark, who was once an assistant at Alabama, can now sell top players on the fact that they’ll now be playing in the SEC and that they’ll face some of the top teams in the country. The exposure will be through the roof and NFL scouts are always going to be watching them.

Things will only grow once Texas sports betting is made legal

It goes without saying, but things will only grow once Texas sports betting is made legal in the Lone Star State. We may have to wait a little longer for that, though, as it’s expected that legislation may not go through for this until 2023. If that’s the case, then things would be in place for when Texas ends up making the jump from the Big 12 to the SEC. With Texas located in Austin, this is big too.

There are few fanbases in college football who are more passionate than the ones in Austin. People fire over to the stadium and pack it every weekend. There’s few things better than seeing a ‘Horns Up’ from Texas fans after either a big score or a big win. It’s really what college football is all about: folks supporting their team and making sure their biggest rivals know all about it. What could be better?

In terms of betting, the games will only be made more intriguing and fun when sports betting in Texas is made legal. People will check out the odds, fire up their bets and then wait and see how things play out. Again, sports betting in Texas right now is not legal, but the hope is that things will change within the next few years.

Once it does happen, people who cheer on TCU, Texas, Texas A&M will no doubt be ready to line up to make bets either in person or through an approved app. College football is one of the biggest money makers in the country. Texas will see the benefit of sports betting being legalized, especially during the college football campaign for years to come.