Jordan Zimmermann will try to get his eighth win of the season as the Washington Nationals face Chris Young and the New York Mets on Monday at Citi Field at 7:10 PM ET. 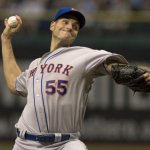 Zimmermann has a 7-6 record with a tremendous 2.35 ERA and has won four of his last five outdings with one no decision. His last win came against the Mets at home on July 18th with a 4-3 result after six innings pitched, allowing four hits and four strikeouts. He has delivered nine consecutive quality starts.

“I want to go six, seven, eight innings every time out,” Zimmermann said. “The longer you stay in, the better chance you have of winning the games.”

The New York Mets, on the other hand, have lost seven of the last eight matches, including two of the last three against the Capitals.

Young, who is starting this Monday, already lost against Zimmermann and have lost four of his last six games with one win and one no decision. “There’s no satisfaction. We need to win, and we lost the game. There’s no feel-good about tonight. I made the mistake that cost us,” Young said on the mast game he faced Jordan Z.