One of the most exclusive clubs in all of American sports is the 500 home run club. Achieve the number and a Hall of Fame induction is all but certain (unless you're part of the steroid era, of course). 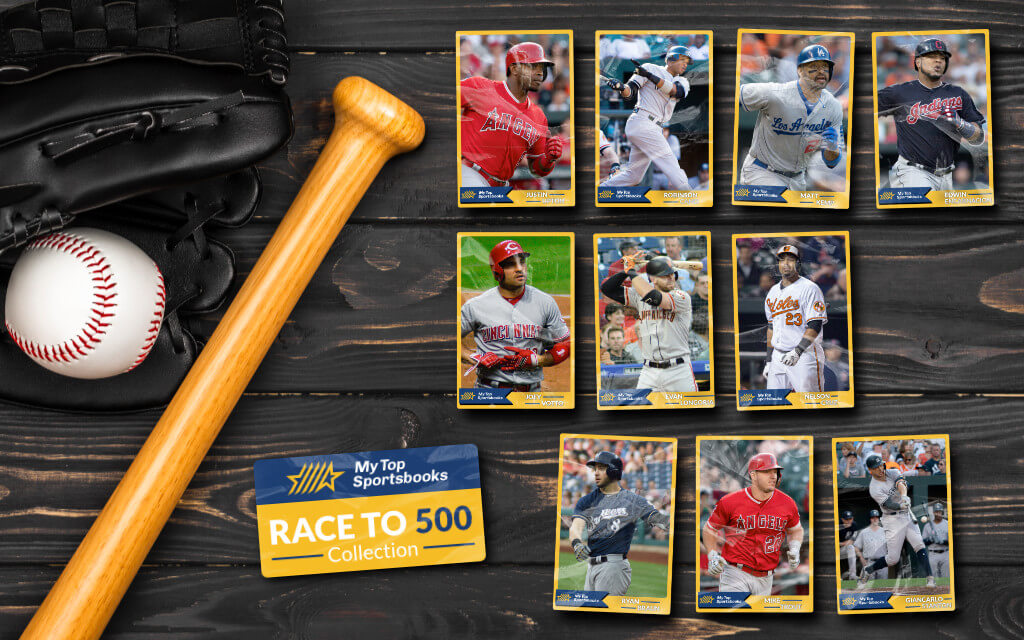 Anyway, the club features a mere 28 players — a meager number when you consider the MLB has been around since 1903 (118 years and counting). On the heels of Miguel Cabrera joining the exclusive list this past August, we got to wondering, “which other MLB sluggers are on track to join the vaunted group?” Let’s find out!

Active Players Near Or Tracking To 500 Home Runs

The only active players on the 500-homer club are the aforementioned Cabrera and Albert Pujos. The latter is now fifth all-time in the home run list, a spot he’s likely staying at with retirement right around the corner for the all-time slugger. However, this won’t be the case for long as a number of players are “on deck” to 500 per se. Let’s count them down the closest candidates:

The Current leaders of the pack 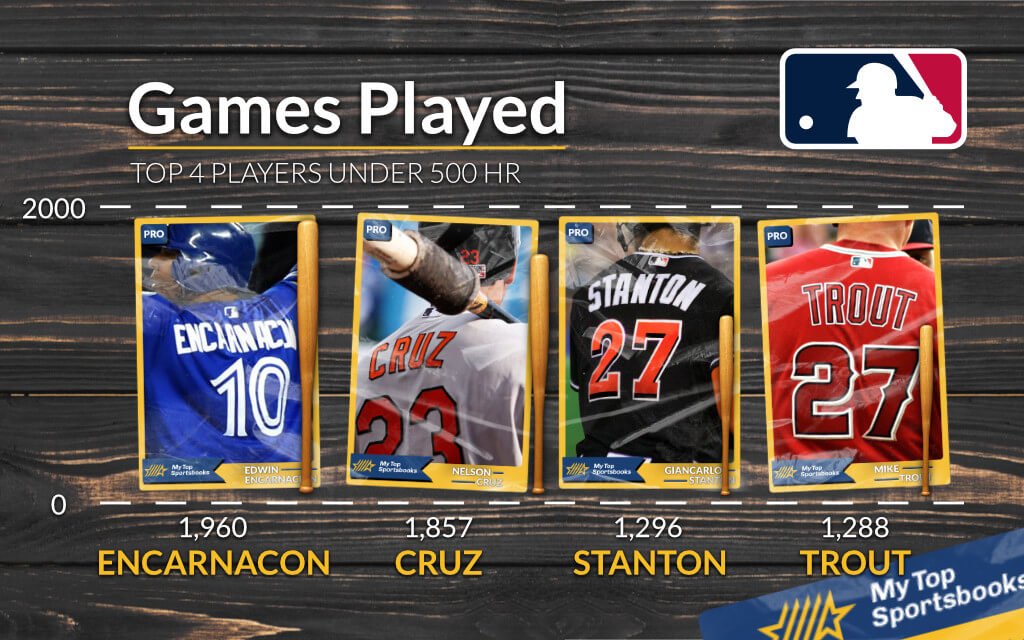 As it stands, the 41-year-old Cruz is 52 long balls from joining the elite company. You would think age would work against Cruz, but he’s defied that logic and then some. Productive MLB hitters near age 40 or over are increasingly rare, which makes Cruz’s past three seasons all the more special. He’s gone yard a whopping 88 times during that span and get this, that came in just over 300 games played (which is under two full seasons).

In fact, Cruz has proven to be one of the best home-run hitters post-age 35 in MLB history. The lone players that have out-homered Cruz at this age and up is Barry Bonds and Hank Aaron, who just happen to be No. 1 and No. 2, respectively, in the all-time homer list.

Cruz needs at least two full seasons to reach the milestone, possibly three if he slows down his torrid pace. He’s never publicly indicated retirement is on his mind. However, his pursuit of history comes at the mercy of an AL team. How many are lining up to sign a 41-year-old as their DH? We’ll find out in the offseason once Cruz becomes a free agent. That variable — not his age — will determine his destiny more so than anything else. 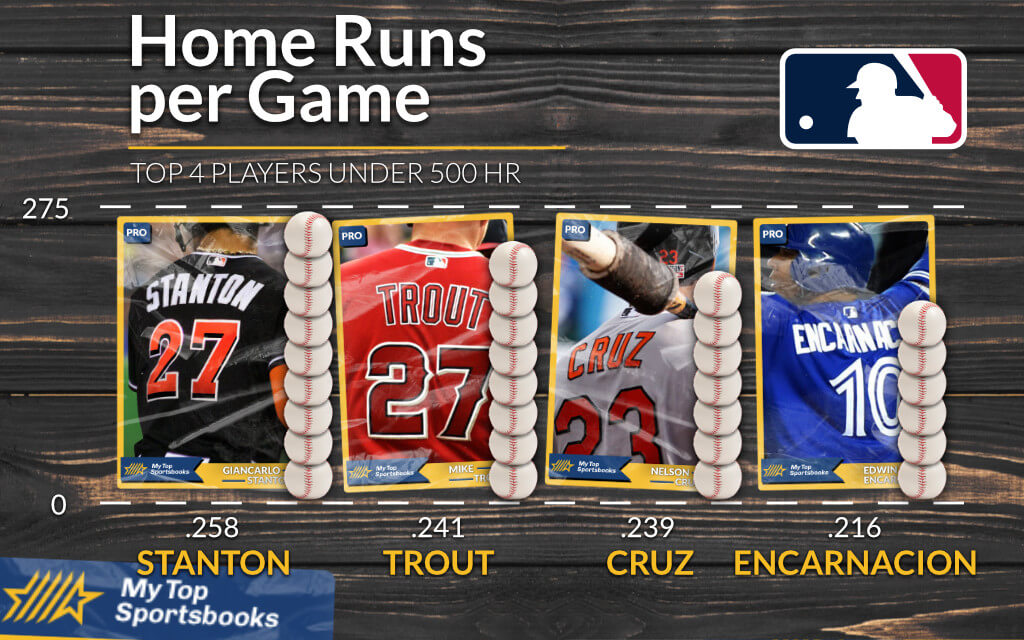 Technically speaking, Encarnacion is right behind Cruz. Only 38 years old, he’s at 424 all-time home runs. The problem for Encarnacion? His playing days might be done — and not by choice.

Encarnacion has spent the entire 2021 season in free agency. He’s openly said he wants to continue to play and does have the 500-club in his sights, but our money is that he’s finished. Encarnacion last played in 2020 for the White Sox. In 181 plate appearances for the club, he batted an abysmal .157 with 10 homers. Unlike Cruz, Encarnacion hasn’t quite found the “fountain of youth.” He’s a deep longshot for 500 home runs.

Close But Not Close Enough

After Stanton, there are five more active players in the 300 home run range. However, we wouldn’t consider any of them legit contenders for 500 aside from one. The players toiling in this “close but not close enough” range include Robinson Cano (334 homers; age 38), Joey Votto (328; 37), Justin Upton (324; 33), and Evan Longoria (317; 35). The harsh reality is age has caught up to all four of these players.

Too young to be the next one to join the club

Sometimes you forget how young Harper still is. He’s in year number 10 in the majors but he’s barely going to turn 29 this October. Harper is already halfway to 500 dingers with 265 home runs. He’ll be a close call for the elite club, but our inkling is he makes it. Beyond his age, Harper is presently playing the best ball of his career since the MVP season in 2015.

Surely, we’ll draw ire from baseball diehards for skipping players like Manny Machado and Aaron Judge on our list. But if there’s one other player in the league right now that we think is destined for 500, it’s Acuna Jr. — yes, even after the knee injury.

The 23-year-old is already up to 105 homers. The injury is unfortunate and costly, but we don’t envision it causing lasting effects to his power. There’s a lot of young guns that could threaten for 500 home runs — including Juan Soto, Fernando Tatis Jr., and possibly Vlad Guerrero Jr. — but we’re most confident in Acuna’s chances.

It’s down to two 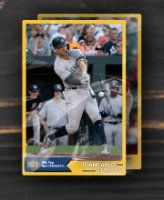 For Stanton to reach the milestone, the main thing is he’ll need to remain in the league (and to a larger degree, healthy). He’s still under contract to the Yankees for seven more years after 2021, so the financial incentive is there. Stanton did have injury-plagued years both in 2019 and 2020 but mostly stayed in the lineup this year. Our money is Stanton does end up at 500 home runs given his sheer power at the plate. 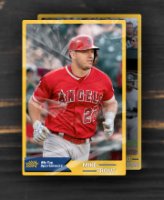 He could always suffer a catastrophic amount of injuries to slow him down. But at the same time, there’s no player on our list that we’re more confident in reaching the historic milestone than him. Only 29 years old, Trout is over three-fifths of the way there with 310 homers. Trout is the best player in the game today and when it’s all said and done, he’ll be one of the greatest ever.

For us, it’s more a question of whether Trout will hit the 600-homer club. That’s an even more exclusive list that only includes nine players at the moment. If we had to make a bet for 600 homers or not, we’d wager that Trout eclipses that number as well. He’s THAT damn good, folks!