With the MLB season almost upon us, it’s time to catch up with what each team has been up to this offseason and determine which ones will surpass their o/u win totals. We’re in the home-stretch now, having dusted off the NL East,  NL Central, NL West, and AL West. Now we hit up the biggest spenders in the MLB, the AL East.

My childhood had few certainties: among them was the fact that broccoli was icky, Weird Al was a genius, and the New York Yankees would win the AL East. But as I’ve grown, so too has the concept of parity in the MLB, and that was never more apparent in the division that used to be dominated by the Pinstripes.

In the last six seasons, all five members of the AL East have been crowned division champs at least once. The most recent was the Toronto Blue Jays, who ended a 22-year playoff drought last season with a 93-win campaign. But heavy is the head that wears the crown and shortly after the postseason ended, Toronto’s rental ace David Price signed with the rival Red Sox, shaking up an already volatile division.

However, the most shocking development of the offseason was that one of these teams didn’t sign a single free agent: the New York Yankees. That would be the “money is no object” NEW YORK YANKEES! While many speculate the Bronx Bombers are pinching their pennies until an outstanding 2018 free agency class, for now, they’re an average team in a division chock full of them.

So just how will the AL East shake out this season? And which of these teams are going to hit their win totals? Well that’s where I come in.

The Jays were a mediocre team at last year’s All-Star break: a group with a whopping 486 runs scored but dogged by unacceptable pitching. While trading for Price was the move that put this team over the top, Marco Estrada and R.A. Dickey also had great second halves, and the return of Marcus Stroman was a huge shot in the arm. So the starting rotation is in good shape to overcome Price’s departure, as long as they stay healthy.

Bringing in J.A. Happ and Jesse Chavez weren’t sexy moves, but this Jays offense is so powerful, all they need is steady pitching and they’ll have a good chance to win every game.

The biggest trouble surrounding Toronto this year might be the contract situations of two of their biggest sluggers: Jose Bautista (40 HRs) and Edwin Encarnacion (39 HRs). Both are in the final year of their contracts and due for huge paydays. The effect it could have on the room if one or both remain unsigned as the year goes on will be interesting.

Still, there’s a lot to like about like about this Toronto team that only played well for half a season last year. A full season with Troy Tulowitzki at shortstop should account for a few more wins, as should the addition of Drew Storen to a pretty solid bullpen already occupied by Roberto Osuna and Aaron Sanchez.

Toronto’s run differential was so substantial to finish last season, their expected win total was 103. While the Jays probably won’t reach that mark, it shows you the level this lineup is capable of. And if this team does backslide, it won’t be by more than six wins.

Signing a bona fide ace in the offseason is usually a good way to boost your playoff chances, but when that pitcher has extensive experience dealing in the AL East, well, that’s just gravy. Price boasts a career ERA of 3.17 in over 600 innings of work versus AL East opponents and will lead a Sox pitching staff in need of a bounce back year.

Boston had the second-worst team ERA in the American League last year, but should be much improved with Clay Buchholz and Koji Uehara returning from injury, and Craig Kimbrel signed to close out games.

The real story of the year in New England won’t necessarily be focused on the how the Sox do, but rather the retirement tour of future Hall of Famer David Ortiz. Big Papi showed he could still play last season, crushing 37 HRs and 108 RBIs; but his “last ride” could be just the motivation an unfocused Red Sox team needs. Boston has finished last in the AL East in three of the last four years, but rallied to win the World Series in 2013 after the Boston Marathon tragedy.

A young core of great fielders – Jackie Bradley Jr., Mookie Betts, and Xander Bogaerts – offset the old dogs on the Boston roster. The X-factors for Boston will be an overpaid Hanley Ramirez and an overweight Pablo Sandoval. If they can’t improve their production this season, Boston could be stuck in mediocrity.

But given the amount of turnover in the division, there’s good reason to believe Boston will rise back to or near the top this season. 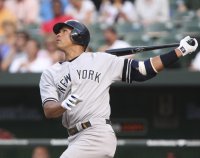 The Yankees organization wants to get younger, but are finding that’s awfully difficult thanks to huge contracts with Alex Rodriguez, C.C. Sabathia, Carlos Beltran, and Mark Teixeira. Saddled with paying – and therefore playing – these past-their-prime talents, New York’s ability to get their prospects on the field has slowed.

Entering the last year of his deal, Teixeira was in line to cede at-bats to young phenom Greg Bird, but a shoulder injury cost the 23-year-old his 2016 season. Now Teixeira will continue to be an everyday starter on a Yanks squad that finished second in runs scored, despite hitting just .251 as a team.

Pitching-wise, the Yanks have another stud kid in Luis Severino, but the rest of the rotation brings more questions than answers. Masahiro Tanaka regressed in his second full season and continues to deal with an elbow injury. Sabathia is returning from a rehab stint. And Nathan Eovaldi and Michael Pineda are inconsistent at best.

It’s a shame New York can’t get more than 927 innings from their starters, because they have one of the best eighth and ninth inning tandems in the game with Dellin Betances and Andrew Miller. And that knockout crew will get stronger once Aroldis Chapman returns from a 30-game suspension.

Suspect pitching and the quality of the rest of the teams in the East make the Yanks a tough sell to finish on the right side of 85 Ws.

Take the UNDER on New York.

Poor Baltimore; the division is wide open, yet oddsmakers aren’t giving this squad much of a chance to make noise. The Orioles are bringing up the rear on most AL East futures. And while the team has lost a lot of the pieces that helped them win the division in 2014, they also have a ton of question marks entering 2016.

The biggest mystery comes with their starting rotation. Baltimore had the second worst starter’s ERA in the AL and their best option, Wei-Yin Chen, left for Miami. Yovani Gallardo is a suitable replacement, but he alone can’t lead a rotation. Ubaldo Jimenez, Miguel Gonzalez, Chris Tillman, and Kevin Gausman all had bad years in 2015. Buck Showalter will need massive turn-arounds from a few of those guys, or the Orioles will be surrendering as many dingers as their offense hits.

But if there’s one thing we know about the O’s, it’s that they’ll be able to mash with the best of them. The team added Mark Trumbo and Pedro Alvarez to a lineup that was third in the bigs in home runs. Unless they improve their .250 team average, though, a lot of those round-trippers will be solo affairs.

In another division, I might like Baltimore’s chances to crack 80.5 wins, but their lack of a real identity will be exposed in the East. The Jays and Yankees can outscore them in a home run derby, and the Sox and Rays should be able to silence their bats.

Take the UNDER on Baltimore. 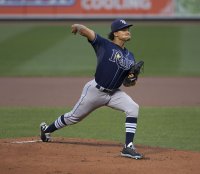 The pitching factory they call Tampa Bay continues to trot out quality arms and the Rays continue to give them zero run support. Tampa finished second-last in the AL in runs scored, but still managed to claw their way to 80 wins, thanks to a stacked starting rotation. Chris Archer led the way with a 3.23 ERA and 252 punchouts, followed by solid years from Jake Odorizzi, Erasmo Ramirez, and Nate Karns (who was traded to Miami).

The Rays will also have the services of Drew Smyly and Matt Moore back on the mound to start this season, with Alex Cobb expected to return midway through the year. So once again, there will be no shortage of pitching talent in St. Petersburg.

If the Rays can get a little more out of their offense, they won’t be a real contender in the East. Brad Miller and Logan Morrison came back in the Karns deal, but neither screams offensive improvement; especially Miller, who fills in for the departed Asdrubal Cabrera.

As long as Evan Longoria and Logan Forsythe stay healthy, the Rays offense should be able to do enough to win when the pitching is on. They won’t be worth taking in any World Series futures, but they should be able to hurl their way to another 80 wins.