With the MLB season almost upon us, it’s time to catch up with what each team has been up to this offseason and determine which ones will surpass their o/u win totals. We’ve powered through one league: hitting the NL East,  NL Central, and NL West. Now let’s talk designated hitters as we nail the American League, starting in the AL West.

The state of Texas has never been renowned for its success on the diamond. Perhaps it’s that lack of success that’s led sports fans in Texas to seek refuge in the dysfunction that is the state’s football teams. However, if last season was any indication, baseball in the Lone Star State may reach a frenzy unseen since the MLB first touched down there in 1962.

Last fall, the Texas Rangers and Houston Astros battled to the final day of the season for the AL West crown. In the end, the Rangers claimed their sixth division title in franchise history, but the Stros and Dallas Keuchel powered through the Wild Card game to reach the ALDS, themselves.

While both teams blew series leads in dramatic fashion, they each return this season with rosters equipped to bring the first World Series title to Texas. But the Los Angeles Angels and Seattle Mariners have the talent to throw a wrench in those plans, while the Oakland Athletics remain an inexpensive enigma.

Over the final two months of last season, the Texas Rangers saw potential blossom into results. Smartly, they elected to not make any drastic changes this offseason. After all, this was the third-best offense in baseball, and once the pitching staff caught up (thanks to a deal for Cole Hamels and the return of Derek Holland from injury), the team went on an absolute tear.

Hamels and Holland will both be in the starting rotation to start the year, meaning Texas should avoid another slow start. Yovani Gallardo left the team for Baltimore, but the Rangers should be comfortable with the knowledge that Yu Darvish is on track to return sometime around May. When fully healthy, this is a potent starting rotation.

But Texas also had some glaring weaknesses last year, and without applying any treatment, can we expect those wounds to heal? For example, the Rangers had the third-most errors in the bigs. Obviously, Texas can’t break up a talented infield which features Elvis Andrus, Rougned Odour, and Mitch Moreland; but if the fielding doesn’t improve, the Rangers could cost themselves another series.

The Rangers also saw some truly awful work from their bullpen last season, but that problem at least tapered after acquiring Jake Diekman and Sam Dyson at the deadline.

Barring more injury troubles, Texas should squeak past 86 wins and hit the OVER.

To give credit where credit is due, most baseball analysts had this Astros group pegged for the playoffs … in 2017. This is a young a group that was supposed to make small strides last season, on the heels of a 70-win campaign in 2014.

Instead, Dallas Keuchel won the AL Cy Young, Jose Altuve was a Gold Glove and Silver Slugger winner, and Carlos Correa took home AL Rookie of the Year as the Astros grabbed the second Wild Card spot (their first postseason appearance in ten years). Now they return largely the same group, hoping to win their first division crown since 2001.

At first glance, Houston’s chances look pretty good, too. While Keuchel got all the headlines last year, Houston had the lowest team ERA in the AL. The starting rotation is in decent shape; Collin McHugh and Lance McCullers return while Doug Fister was added in the offseason. Fister had a rough run in Washington, but was always a productive hurler in the American League.

Offensively, Houston operated on a “feast or famine” approach, crushing 230 homers, but also leading the AL in strikeouts. Their attack may be a little less skewed this year now that their worst offender, Chris Carter, is gone. However, Houston has no heir apparent to Carter, so production from first base could be shaky.

Perhaps the biggest holes to fill come in the bullpen, where the Stros are losing almost 180 innings of work, waving goodbye to Brad Oberholtzer, Chad Qualls, and Vince Velasquez, to name a few. However, the team did acquire closer Ken Giles, and the young righty should challenge Luke Gregerson for ninth-inning work.

Overall, this is a team trending upwards and your bet should support that. Take the OVER. 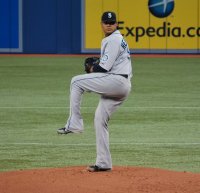 Lofty expectations surrounded the Mariners last season, but for the life of me, I can’t remember why.

I know Nelson Cruz was an excellent addition, but apparently all that did was give the rest of the offense an excuse to take a year off. Despite Cruz belting 44 dingers and batting .302, the Mariners as a team hit just .249 and had the third-fewest runs in the AL.

New GM Jerry Dipoto has made a couple shrewd additions to boost that average, bringing in Adam Lind and Nori Aoki. Combined with the likes of Robinson Cano, Kyle Seager, and Cruz, that top of the order lines up pretty nicely for the M’s.

At the front of the Mariners rotation, Felix Hernandez should bounce back from what was his worst statistical season since 2008 (201 innings pitched and a 3.53 ERA). But “King Felix” will not dictate the performance of this team; it will be up to the arms behind him.

Hisashi Iwakuma overcame an early-season injury to close 2015 with six straight quality starts. Taijuan Walker was the definition of inconsistent in his first full season as a starter, but the 23-year-old has all the physical tools to be a force in the MLB. Rounding out the starters are Wade Miley and Nate Karns; Steve Cishek comes in to replace closer Fernando Rodney.

But on-paper improvements will need to translate to on-field improvements. Based on expected wins and losses, the Mariners were even worse than their record last year. That’s why I’m skeptical they’ll notch an eight-win improvement. 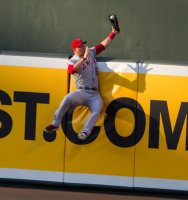 The Angels missed out on the playoffs last season by a single game. And perhaps that’s the best example of how weak the AL was last year. Los Angeles was not a good baseball team; they just happened to have one outstanding player.

Mike Trout notched an insane 9.4 WAR in an MVP-caliber 2015. The second-closest Angels player in that category was a declining Albert Pujols at 3.1.

While it’s hard to have low expectations for a team when a single player can win you ten extra games, the Angels are nothing to get excited about. Already weighed down by ridiculous deals to C.J. Wilson, Jered Weaver, Josh Hamilton (salary retained in a trade to Texas), and Pujols, the Angels elected to play it small this offseason.

The starting rotation will be the same, a grind-out-games bunch that had a combined ERA of 3.98 and walked 303 batters over the year. L.A. brass is hoping Wilson and Weaver can regain any of the form that fooled them into paying both over $20 million a year. Hector Santiago and Garrett Richards were the Angels best starters last year, but combined for just a 24-21 record.

At least the Angels are getting a defensive upgrade at shortstop. They traded away Erick Aybar and prospects for Andrelton Simmons, a much better fielder up the middle. But they failed to really add any offense. The addition of Yunel Escobar at third looks good coming off a season where he hit .314. That was a statistical abnormality, though: he’s not really that good a hitter.

There’s only one way to bet the Angels this season and that’s the UNDER. There’s just not enough talent outside Trout; and if he happens to get hurt at any point this season, you’ll be left hoping for a bunch of donkeys to pull you across the finish line. 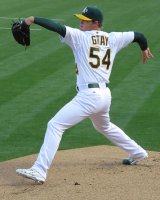 The A’s were mathematically fascinating last year. The team finished with just 68 wins, despite having only a -35 run differential. For comparison, the other 68 win teams had a -82 and -107 differential. The Mariners finished behind the A’s in run differential, but eight games ahead in the standings.

I guess you could say Oakland lacked a “clutch gene:” they went just 19-35 in one-run games. While they’re on track for an over-correction this year, remember they’ve lost some of the pieces that helped them play so many tight games. Ben Zobrist, Scott Kazmir, and Tyler Clippard were all deadline day casualties, and Brett Lawrie was traded this offseason.

However, this is still a young bunch that’s fun to watch, with Billy Burns, Josh Reddick, and Marcus Semien on offense and Sonny Gray leading an inexperienced but promising rotation. The Athletics have a history of overachieving in the regular season, and since I expect a regression from the Mariners and Angels, I think Oakland can pick up the extra wins.