With the MLB season almost upon us, it’s time to catch up with what each team has been up to this offseason and determine whether they’ll hit their over for wins. We already nailed down the NL East. Next stop: the NL Central.

There is currently a 116-year-old woman living at the Vandalia Senior Center in Brooklyn. She’s the oldest woman on Earth. What makes her sheer stubbornness in the face of human expiration even more noteworthy is the fact that she might be the only person in the United States who’s able to remember the Chicago Cubs winning the World Series.

It has been 108 years now since the Cubs won the ultimate prize, and 71 years since the infamous “Curse of the Billy Goat” that has kept the team from even making it to the Fall Classic. But if we are to believe oddsmakers, this will be the year the Cubbies finally get it done; or maybe they’ll tear their fans’ hearts out in excruciating fashion once again.

While Chicago may have the best roster in baseball, the NL Central is no joke in terms of competition. Last season, the Cubs’ 97 wins were only good enough for third! This season should be another Mexican standoff between the Cubs, St. Louis Cardinals, and Pittsburgh Pirates, while the Milwaukee Brewers and Cincinnati Reds sit back and watch.

Here’s our take on this year’s win totals in the NL Central.

So just how did the Cubs pass the Cardinals and Pirates in expectations for this season? Well knocking both of them out of the postseason last year was a good start. Stealing St Louis’s best contact hitter (Jason Heyward) and one of their top three pitchers (John Lackey) in free agency was an even better follow up. Along with the addition of Ben Zobrist, Chicago now has a lineup capable of getting on base, maximizing the value of their hard-hitting duo of Anthony Rizzo and Kris Bryant.

From a pitching perspective, Jake Arrieta was the story last year, not only in the Windy City, but across the nation. The 29-year-old was the best pitcher in baseball over the latter half of the season, surrendering just four earned runs over the final two months on his way to a Cy Young award. But it would be foolish to assume that Arrieta can duplicate that performance again this season: his 1.77 ERA was significantly lower than his career average. He should be one of the NL’s best again this season, but even if he regresses to his mean, Lackey, Jon Lester, Jason Hammel, and Kyle Hendricks have more than enough talent to pick up the slack.

Rounding out this loaded team is an underrated but very effective bullpen. Chicago added Adam Warren this offseason to a group that included Travis Wood, Trevor Cahill, Pedro Strop, and Hector Rondon.

The Cubs are current World Series favorites for a reason. If they can avoid major injuries, 90 wins is an easily attainable mark. 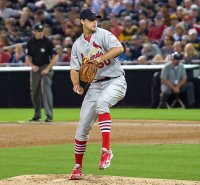 Of all the lofty win totals in the Central, St Louis is the one I worry about most, which might sound foolish. After all, the Cards have hit 88 wins or more in five straight seasons now. But even the most dominant teams have down years: the Yankees of the late 90s were a dynasty, but in their last title-winning season (2000), they only hit 87 wins.

St Louis may be a playoff mainstay, but even the most loyal of Cards fans must admit there are some questions that remain unanswered entering this season. The biggest is the health of the team’s stars. Matt Holliday, one of their biggest bats, missed half of last season, as did ace Adam Wainwright. St Louis will already be shorthanded entering this campaign with starting pitcher Lance Lynn out following Tommy John surgery and catcher Yadier Molina unlikely to play Opening Day (torn thumb ligament).

The Cards shored up their pitching staff by signing Mike Leake, but should more injuries hit the team, they could be in trouble. The next-man-up approach worked last year, but losing Heyward and Jon Jay makes the Cards pretty shallow in the outfield should Holliday get injured again. Of course, knowing how successful this organization has been developing players, young outfielders Stephen Piscotty and Randal Grichuk will probably both be studs this year.

After hitting the century mark in wins last season, St Louis is due for a regression. But given how stable the franchise has been in the new millennium, it seems doubtful they’ll drop by 13 wins or more.

Take the OVER on the Cards.

The MLB added a second Wild Card spot in 2012 to increase drama and give more teams a shot at the postseason. But if you ask the Pittsburgh Pirates, I’m sure they’d love nothing more than to go back to the old way of doing things. Pittsburgh has hit 94, 88, and 98 wins in the past three seasons, each time good enough for the first Wild Card in the NL. But, in the last two years, they’ve run into the hottest pitchers in the league in Madison Bumgarner and Jake Arrieta, and their playoff run ended after one game.

If Pittsburgh wants to avoid another one-game showdown with a top-tier ace, they’ll need their motley crew of pitchers to step up. Unable to spend like the Cards or Cubs, the Pirates were forced to roll the dice on Jonathon Niese and Ryan Vogelsong to replace J.A. Happ and A.J. Burnett. Gerrit Cole and Francisco Liriano are solid front of the order guys, but it’s no secret that this is the most shallow group of the Central’s three contenders.

The Pirates have gotten by with average pitching in the past thanks to excellent team defense. They still have one of the best outfields in all of baseball with Andrew McCutchen, Starling Marte, and Gregory Polanco, but the infield will have an entirely new look after Aramis Ramirez retired, Neil Walker was traded, and Pedro Alvarez wasn’t resigned. Spring training will go a long way in determining who will make up that infield, at least until Jung Ho Kang is ready to return from injury.

The bullpen was hit even harder in the offseason, which is bad news for a team that had the lowest bullpen ERA in the NL. Joakim Soria, Joe Blanton, and Antonio Bastardo are all gone. The Buccos do still have Tony Watson, Jared Hughes, and closer Mark Melancon, but they will need some production out of new faces like Juan Nicasio to duplicate last season’s success.

The National League contenders all made big moves to improve or at least tread water this year. Pittsburgh is the one team that seems to have gotten worse, at least on paper. But given the culture of winning they’ve developed with McCutchen leading the way, it’s hard to envision Pittsburgh falling off by 11 wins.

A push might be in play, but I would still roll with the OVER.

More like Milwaukee “Boo-ers!” Am I right? Not only were the Brew Crew an awful team last season, but they also feature one of the most unlikeable players in baseball in the form of Ryan Braun. Not much is different this year, and there’s very little reason to get excited about this current Milwaukee outfit.

The Brewers had the third-worst ERA for starting pitching in the MLB last year, and dealt away one of their few non-terrible arms in Mike Fiers at the deadline. That means the team will be going young with the rotation this year; neophytes like Taylor Jungmann (3.77 ERA), Jimmy Nelson (4.11 ERA), and Zach Davies figure to eat up a lot of starts. While the experience should help their growth, they may also get hung out to dry many nights; the Brewers were one of the worst fielding teams in the MLB last year (116 errors).

Those defensive issues won’t be solved by the additions of Will Middlebrooks and Chris Carter on the corners. However, the free-swinging Carter should provide some pop to the lineup and help ease the loss of Adam Lind. But most of the Brewers’ acquisitions were minor league deals building towards the future. And when that is the case, it’s typically safe to assume that team will suck in the present. 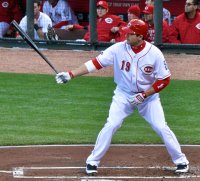 Cincinnati could barely buy a win on the field last year; adding insult to insult, fans had to watch the best player in franchise history get denied his third attempt at reinstatement. With Pete Rose’s Hall of Fame chances firmly shut down, and the on-field product not looking any better this year, these are dark days for Reds fans.

Now that trade talks are swirling around Jay Bruce this week, the Reds could be even more inexperienced entering this season. If there was one category that Cincy dominated in last year, it was lack of experience. Now we’ll get to see if all the rookies they sent out to the mound last year have grown.

I’m sure the Reds will see improvements from their young pitchers, but after dealing Johnny Cueto last year and Todd Frazier in the offseason, I expect every useful asset to be on the table this year. The biggest thing to keep an eye on will be the trade talks for Joey Votto.

As for their win total, well, if I was Pete Rose, I’d take the UNDER.