It’s almost here! Pitchers and catchers report to camp this week, meaning the wait for baseball is almost over (though the wait for meaningful baseball is a little further off). With the MLB season almost upon us, it’s time to catch up with what each team has been up to this offseason and determine which side of their win totals they’ll finish on. First stop: the NL East.

After the Philadelphia Phillies’ run came to an end in 2011, the National League East had an opening for contender status. While the Cards dominated the Central and the Giants and Dodgers did likewise in the West, the East was relegated to in-then-quickly-out status in the playoffs.

All that was supposed to change last season; it was supposed to be the year of the Washington Nationals. And while the NL East did send a team to the World Series for the first time since 2009, it was not one anybody predicted.

The New York Mets exceeded everybody’s expectations, winning the NL East by seven games and pitching their way to the Fall Classic. The Mets were the only team to beat expectations, though: the other four teams fell short of their 2015 win totals, some hilariously so.

Last year, the Nationals had the MLB’s highest O/U at 93, but their “stacked team” couldn’t put it together and fell short by a whopping ten games. Miami also had lofty expectations after a busy winter in 2015; like Washington, they missed their goal by 10.5 games. The public knew the Braves and Phillies were both in rebuilding mode last season, yet those teams still couldn’t muster enough juice to hit 73.5 and 67 wins, respectively.

This season, expectations have been sufficiently tempered for the NL East, but that doesn’t mean the Nationals won’t take their best swing at the reigning champion Mets. The war already started this offseason when the Nationals signed Mets playoff hero Daniel Murphy to a three-year deal.

So how will the NL East shake out this season? And who will come out on top? Let’s take a deeper look.

The Mets finished just three wins short of taking it all last season and they’ll return an even stronger team in 2016. New York made a lot of big money moves (reminiscent of the team across town), but the biggest was resigning Yoenis Cespedes. A catalyst for last year’s playoff run, Cespedes gives the Mets lineup a power element they lacked to start last year.

New York also got better defensively, thanks in part to the departure of Murphy. Never a stalwart at second base, the Mets traded Murphy for Neil Walker, which should be an upgrade in the middle infield. Couple that with a full season of David Wright and increased outfield depth (thanks to Alejandro De Aza), and the Mets should be even tougher to score runs against.

That’s bad news for the rest of the NL East, as the Mets already had perhaps the best starting rotation in all of baseball. Jacob deGrom, Noah Syndergaard, Matt Harvey, and Stephen Matz make up a devastating top four, with lovable vet Bartolo Colon slotting in as the fifth starter until Zack Wheeler returns from surgery.

This team won 62-percent of their divisional games last season, and given the level of competition they figure to be playing this year, that number should go up.

Take the Mets to hit the OVER. 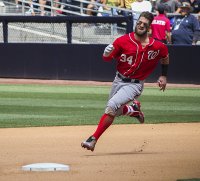 Can we afford to trust the Nationals as contenders for a second year in a row? Their only productive hitters – other than Bryce Harper – left this winter: Denard Span signed with the Giants and Yunel Escobar was traded to the Angels.

In an effort to replace those departing bats, the Nats traded a bullpen arm, but not the one that needed to go. Drew Storen went to Toronto for outfielder Ben Revere and, somehow, beyond all comprehension, Jonathan Papelbon remains in a Washington uniform.

Harper may be the reigning MVP, but how will his performance be affected if he’s getting his neck wrung every week? Dusty Baker is an upgrade at manager, but this Nationals locker room may be too divided to save without a big move being made. And even if the players learn to co-exist, Washington still needs big improvements as a pitching staff if they’re going to contend. Every starting pitcher seemed to regress last season; even Max Scherzer was a letdown in the second half of the season, and the bullpen blew 23 saves as a unit.

The Nats problems don’t seem too difficult to solve, but I’m done expecting this group to step up to the challenge. They haven’t cracked 87 wins in two of the last three seasons and I expect the same this year.

Take the UNDER on the Nationals. 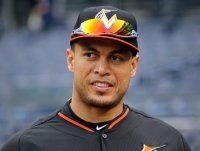 It’s hard to have much continuity when Jeffrey Loria is running your organization, so you have to give the Marlins some credit for not making any drastic moves after falling flat again last season. Their young core remained in place despite murmurs of another big deal, which has to excite the 17 Marlins fans in existence.

Giancarlo Stanton, Jose Fernandez, Marcell Ozuna, Dee Gordon: there are reasons to be excited about this group, especially after bringing in Wei-Yin Chen to help a struggling starting rotation. The team also took a chance on Edwin Jackson, which could end up paying off, but won’t burn the team if it doesn’t.

The National League has a distinct line between the haves and the have-nots: Miami is the one team that can’t make up its mind which side it’s on. The Marlins appear to have the talent to be a .500 or better team, especially with so many bad teams in the NL to beat up on. But one big injury always seems to completely derail their season. The Marlins haven’t cracked 81 wins since 2009 and, while I think they’re getting better, I don’t see a ten-win improvement over last season. 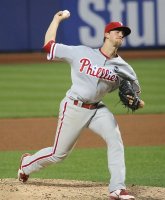 For years, the Phillies had been reluctant to say goodbye to the past, holding on to guys from their championship run despite being a garbage team. But last season finally saw the exodus of former stars; now only Ryan Howard’s unmovable mammoth contract remains and the team can look towards the future under new leadership.

Hiring Matt Klentak as the newest GM was the biggest move of the offseason for the Phils, but they also did a couple small things to improve the on-field product. (Almost anything would be an improvement over last season.) The Phillies brought in Jeremy Hellickson and Charlie Morton to help the pitching staff, which is anchored by promising youngster Aaron Nola. Those three should help shut down the conveyor belt of misery that dropped pitchers on the Philly mound last year.

Philadelphia didn’t do much to improve its terrible offense, but another season of experience should help Odubel Herrera and other pups increase their production.

It’s pretty hard to have two sub-67 win teams in the same division and the Braves are poised to be terrible again this year. Throw in the fact that the Phillies were almost respectable in the second half of last season, going 34-37, and I think this team can improve by the four wins necessary to hit the OVER.

If it were 2010, the Braves would have a very nice roster: A.J. Pierzynski, Erick Aybar, Nick Markakis, Nick Swisher, Michael Bourn would’ve made for a decent core. But in 2016, this is a roster full of outdated players and youngsters not yet ready for the spotlight. Freddie Freeman is the one player currently in his prime, and last season showed that he alone can’t carry an offense. The Braves finished last in runs scored by a wide margin, finishing 40 behind the 29th-ranked Marlins.

After trading Shelby Miller, Julio Teheran becomes the number one starter. Teheran is a decent arm but not a front of the roatation guy; his 4.04 ERA last season shows what kind of trouble the Braves are in. After Teheran, there are a few intriguing young arms, like Matt Wisler, but certainly nothing you can rely on.

The Braves set themselves up nicely for the future with all the offseason moves they made to stock up their farm system. But there’s little to be excited about for this season.

Take the UNDER on Atlanta.