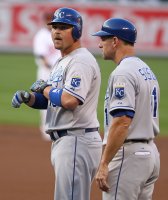 After getting swept by the Astros in Houston, the AL Central-leading Kansas City Royals (44-31, 22-13 Home) return to the friendly confines of Kauffman Stadium to face the second-place Minnesota Twins (41-37, 16-22 Away). Game one of the crucial four-game set goes tonight at 8:10 PM Eastern.

The Royals will send 36-year-old Chris Young (7-3, 2.71 ERA) to the mound against Minnesota’s Kyle Gibson (5-6, 3.30 ERA). Young is having the best season of his 11-year career and has won three of his last four starts. He was solid against the A’s in his last start on Monday, giving up four hits and two runs over six innings of work.

The Royals couldn’t keep that momentum going as they headed to Houston, dropping three in a row (6-1, 4-0, and 6-5) to the Astros. Kansas City still has a comfortable 4.5-game lead on Minnesota in the AL Central heading into tonight’s pivotal series, though.

The Twins missed a great opportunity to make up some ground on the Royals by dropping four of their last six to the lowly Brewers and Reds. Yesterday, the Twinkies were shut down by Cincy ace Johnny Cueto, who held Minny to just four hits and one run over eight innings en route to a narrow 2-1 win.

Gibson was decent in his last start, going 6.2 innings of six-hit, two-run ball against the Brewers. The bullpen helped him out with 2.1 scoreless innings while Torii Hunter belted two dingers to vault Minnesota to a 5-2 win.

In the trends, Kansas City has won five of the six against Minnesota this season and, with arguably their most consistent pitcher on the mound at home, are deserving -159 favorites.

MLB Series Bets for September 10 to 12

MLB Series Bets for September 10 to 12