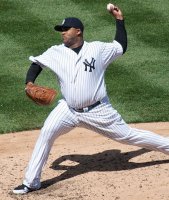 Not only is Sabathia having a rough year on the mound, he’s also found himself in trouble outside the diamond. The 6;7″, 285 pound pitcher was involved in a street brawl outside a Toronto night club on the weekend. He missed his scheduled start yesterday as a result.

“I just flipped out, you know. I could have handled it better,” the big lefty told reporters. “Made a bad decision. Sometimes these things happen.”

The Yankees turned to Bryan Mitchell in Sabathia’s stead. The 24-year-old Mitchell went the first 1.2 innings, giving up four hits and one earned run before taking a line drive to the face and being forced to leave the game. Mitchell was replaced by Caleb Cotham, who was hit hard to the tune of six hits and three earned over two innings of work.

Fortunately for New York, their big bats responded, putting up seven runs over nine innings to force the game into extras. Chase Headley won it for the Yanks in the 10th on an RBI grounder.

The big offensive output was nothing new for this year’s squad, which is second in the majors in runs, seventh in OBP, and third in slugging.

The Minnesota Twins, meanwhile, are continuing their downward spiral. The former holders of an AL Wild Card slot have slid back to .500 and are 12.5 games back of the Kansas City Royals in the AL Central. They had a modest two-game winning streak snapped last night.

Tonight, they’ll turn to right-hander Mike Pelfrey (6-7, 3.70 ERA); in his last start, Pelfrey went seven innings, allowing four hits and one run against the Texas Rangers, while Minnesota earned an 11-1 victory. However, he’s 0-4 in his last seven starts on the road.

Sabathia’s issues on and off the diamond eventually will catch up and cost the Yankees this season, but given Pelfrey’s struggles on the road, don’t expect it to be tonight.

(Photo credit: User chris.ptacek on Flickr (Originally posted to Flickr as “[1]”) [CC BY 2.0 (http://creativecommons.org/licenses/by/2.0)], via Wikimedia Commons. Photo has been cropped.