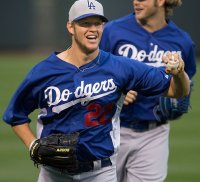 If I told you that the Los Angeles Dodgers (45-35, 27-13 home) were ten games over .500 and three games up in the NL West and then I told you that Clayton Kershaw was 5-6, you’d be forgiven for assuming he’d been traded. But that’s exactly the situation the Dodgers are in; their ace has been eminently hittable – by his standards – posting a 3.20 ERA (up over 1.5 runs from last season) to go along with his sub-.500 record.

The two-time reigning NL Cy Young winner has lost three straight decisions for the first time in his already storied career. But it’s not time to hit the alarm bells just yet. Kershaw went no fewer than six innings in those three starts, gave up only seven earned runs total, and struck out 28 batters. Cy Young-worthy? Maybe not. Freak out worthy? Definitely not.

Tonight, Kershaw will be facing a Mets team that just can’t figure it out on the road; an impressive 15 games over .500 at home, New York is an equally unimpressive 15 games under .500 away from Citi Field. Their struggles continued against the Cubs this week as they dropped three straight in Chicago, scoring just one run in the process.

The Mets have now scored just 277 runs this year, second-worst in the NL, ahead of only the lowly Phillies.

Young flamethrower Noah Syndergaard (3-4, 3.59 ERA) will do his best to keep the Dodger bats at bay tonight while the New York offense tries to find the form that saw them win 11 straight games in early April.

Syndergaard was marvelous in his last outing, throwing eight innings of five-hit, one-run ball against the Reds. The Mets needed every ounce of that gem to top Cincinnati, 2-1.

Betting-wise, Syndergaard has the potential to keep the Mets close in this one, but Kershaw – who is still dealing despite his personal three-game losing streak – facing a slumping Mets lineup is the perfect storm. Look for the Dodgers (-235) to keep New York’s futile road record intact.