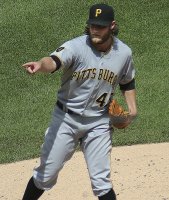 The Pittsburgh Pirates’ (54-38, 22-22 Away) pitching staff figured to take a step back this year after losing Edinson Volquez to the Kansas City Royals (55-36, 30-17 Home). But young right-hander Gerrit Cole (13-3, 2.30 ERA) has become the new ace of the rotation, leading the MLB in wins and lowering his ERA by over 1.3 runs versus his 2014 sophomore season. Tonight, Cole and the Pirates will look to take a seconds straight game from the AL-leading Royals when the teams square off at Kauffman Stadium in Kansas City (8:10 PM Eastern).

Cole has continued his breakout season of late, posting a 2-0 record during July, and going seven innings of six-hit, two-run ball against the Cardinals last time out, helping his team to a 5-2 win over the only team they’re chasing in the NL standings.

The Pirates, as a team, struggled out of the All-Star Break, dropping three in a row to a struggling Milwaukee squad. But they bounced back on Monday beating the Royals 10-7.  Six players had multiple hits for Pittsburgh, including first baseman Travis Ishikawa, who recorded just his first homer of the season and two doubles.

“I couldn’t tell you why it worked tonight. I’m just trying to see the ball. Wherever it goes, it goes,” said Ishikawa to the Associated Press. “I wish I could tell you I was controlling it, but if I could my average would have been a lot higher … Tonight was just my night when the balls began to fall.”

Tonight, Ishikawa and company will face Royals lefty Jason Vargas (5-2, 4.10 ERA), who has won four of his last five starts, including two straight. Vargas didn’t give up a run in his last start, scattering five hits over six innings against the Minnesota Twins.

Considering this is an interleague matchup, there aren’t many betting trends between these two ball clubs. But with Cole on the mound, the value is with the Pirates.