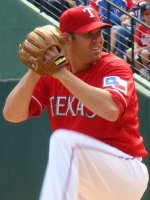 After sweeping the Astros last week to take over top spot in the AL West, the Texas Rangers (81-69, 42-34 Away) will look to maintain their two-game lead tonight when they travel to the Bay Area to face the Oakland Athletics (64-87, 33-43 Home) at O.co Coliseum (10:05 PM Eastern) in the second of a three-game set.

Texas took game one last night, 8-6. Mitch Moreland hit a game-tying two-run homer in the sixth, and then Delino DeShields put the Rangers ahead for good in the seventh with a sacrifice fly.

“It was just one of those games we continued to fight and kept rolling the lineup over trying to create some opportunities, and we were able to put some runs on the board,” Moreland told the Associated Press.

The win improved Texas to 7-2 in their last nine. Reliever Drew Pomeranz took the loss for Oakland.

Oakland will counter Lewis with lefty Felix Doubront (3-2, 4.95 ERA). Doubront continued what has been an abysmal season for the A’s last time out, going just 4.1 innings and allowing seven earned in a 12-4 loss to this same Ranger team.

Oakland have lost three straight overall and sit at the bottom of the AL West, 17.5 games behind Texas. They are also bringing up the rear in the American League, as a whole.

It’s tempting to take the Athletics as a home underdog, but the Rangers have been road warriors all season, and Oakland hasn’t really fared any better at home than on the road. With Lewis looking like he’s back on track, take Texas to win.