I’ve done more than enough previewing of the upcoming MLB season in the past month, so I meet the imminent start of baseball with both a sense of excitement and relief. Finally, all the speculation can come to an end and the best of the best will sort everything out over 162 games.

But before I can truly enjoy the six straight months of meaningful baseball on the horizon, it’s time to do one more round of forecasting. Here is my take on who are the favorites for some baseball’s biggest hardware, including the biggest one of all, the title of World Series Champs.

It’s no secret Mike Trout is the most valuable player to his team in the AL: without him, the Angels are a last-place team. But making the playoffs is a huge boost to any player’s candidacy, which is why he only has one MVP in his last four seasons.

Reigning champ Bryce Harper will be hard to knock off, especially if the Nationals have the resurgence that many are predicting. But Paul Goldschmidt was a consensus runner up last season, and could have a strong case if the D-Backs take a big step forward.

This award has been a total crap-shoot over the past decade: 11 different players have won since 2005. With any player capable of rising up to claim it, Chris Sale is a popular choice. Throwing some of the nastiest stuff in the game right now, he should be in line for more production on a rebuilt White Sox team.

Statistical regression would suggest neither Jake Arrieta nor Zack Greinke can repeat last year’s production. Those same models don’t question Clayton Kershaw, who has been dominant for the last seven seasons.

AL Rookie of the Year Odds:

The Twins will likely be in a clubhouse competition for AL ROY, as youngsters Byron Buxton and Jose Berrios compete with South Korean slugger Byung Ho-Park.

NL Rookie of the Year Odds:

Corey Seager set some pretty high expectations during his September call ups last season and should be in line to meet – or exceed – them. Even if he’s not as impressive, there’s doesn’t appear to be much competition in the NL outside a pair of pitchers. 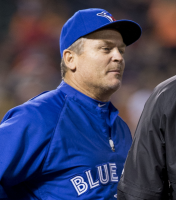 AL Manager of the Year Odds:

Hinch made a good case to win last year, but was edged out by the amazing turnaround orchestrated by fellow statesman Jeff Bannister. If the Astros are as good as I expect they should be (see below), Hinch should get the call this year.

NL Manager of the Year Odds:

Walking into the most dysfunctional clubhouse in the bigs, Baker will get bonus marks for any improvements he can make with the Nats (even though, on paper, this is a playoff team).

Odds to be the first manager fired:

Fredi Gonzalez has been on the job a while now, and the Braves don’t appear headed towards any miracle turnarounds. However, he could get beaten to the unemployment line by some AL franchises who actually have expectations for this season and won’t wait around if their teams start poorly.

Odds to lead the MLB in home runs:

Giancarlo Stanton is probably the best power hitter on this list, but until he plays a full season, it’s hard to trust him to get it done.

Odds a player gets suspended 50 games for PEDs: 4/9

Odds a player gets suspended for life for PEDs: 80/1

Odds to meet in the World Series:

Odds to win the World Series: