By this point you probably know Major League Baseball suspended Alex Rodriguez for the rest of the 2013 regular season, the 2013 postseason and the 2014 regular, starting Thursday, but you should also know he went 1-4 in the 8-1 loss the Yankees had against the White Sox on Monday night. 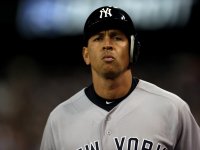 “Obviously, I’m disappointed with the news today,” Rodriguez said at a news conference before Monday’s game. “What we’ve always fought for is the process, and I think we have that, and I think at some point we’ll sit in front of an arbiter, and we’ll give our case. That’s as much as I feel comfortable saying right now.”

“Probably the worst time of my life for sure,” he said. “Obviously, for the circumstances that are at hand, and dealing with a tough surgery and a rehab program and being 38.”

Rodriguez can and will appeal and could continue to play into the 2013 season as long as the appeal process goes on.

After going 1-4 Rodriguez thinks he can do better. “We’re just getting started in this process,” he said. “But for me, personally, I just want to get back to baseball, playing hard and playing with a lot of intensity. I just want to see what our team has to offer.”

The Yankees are listed 20/1 to win the American League and 40/1 to win the World Series.  Will Alex Rodriguez be there to help put his team the rest of the season?  The odds say he won’t be, but we will keep hearing about this guy for a while.