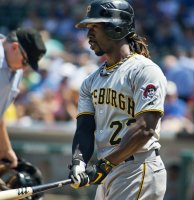 Maybe it’s because football season is rapidly approaching, or perhaps it’s because they’ve already played 120 games, but it’s hard to believe that the MLB season is only 75-percent done; a full quarter of the year remains.

With so much baseball left, World Series futures are still very much in play. As we’ve done throughout the season, let’s highlight where the value lies among the World Series hopefuls.

The good news for Pittsburgh is that they’ve been one of the best teams in baseball for most of the season, and they’re continuing to play great ball of late. The bad news is they aren’t going to catch the Cardinals in the NL Central and will need to win a Wild Card game in order to advance to the Division Series.

Using winning percentage and run differential, the Pirates are clearly the second-best team in the NL. The Bucs also have the second-best team ERA in the majors. With a three-plus game lead over the Cubs for the first Wild Card spot, Pittsburgh is likely to get homefield advantage for the one-game playoff. That’s great news for a team that is 20 games over .500 at home.

Like the Pirates, Houston is among the best teams using record and run differential as our criteria, and also have a great team ERA (fourth in the MLB). While Pittsburgh has a better record than the Astros, Houston is likely to win the AL West and avoid the one-game playoff.

Besides one bad road trip, the Astros have been very good since the All Star Break, and they made key additions at the trade deadline to sustain their pennant push.

San Francisco is in the exact same spot they were last year. How did that end, again? Oh right, with another World Series ring. Though they’re well back in the Wild Card race, the Giants are in a neck-and-neck race to capture a weaker NL West. Their run differential is third-best in the NL, and the majority of their remaining slate is at home, where they are tough to beat.

Advanced metrics indicate the Giants have had bad luck this season and should have four more wins at this point, enough to make them a top contender. If the averages bear out over the rest of the season, the Giants stand a good chance of cracking the postseason field. Then – as they say – all bets are off for Madison Bumgarner and the rest of this playoff-tested squad.