How To Bet On Indianapolis Race

Few raceways carry as much history as Indianapolis. That history just gives any race inside the track extra added stakes, and that goes for competing drivers and bettors alike. It’s certainly the case with NASCAR’s Brickyard 400 race inside the prestigious speedway. Sky-high stakes require adequate preparation, hence why we’ve whipped up this Indianapolis NASCAR betting guide. Here’s everything you need to know about gambling on the race and how to put yourself in a winning position.

If you’re looking for an online sportsbook to not only handle your Indianapolis wagers but all NASCAR gambling needs, then you should start with the list of bookmakers below. They’ll be your best bet — pun fully intended — for getting the most bettor-friendly NASCAR odds Indianapolis, promotional savings, and a top-notch gambling experience.

Who are the front-runners to finish first at Indianapolis? That can be found in the table underneath. While the racing field includes more than forty drivers, the ones highlighted here have the top NASCAR odds to win Indianapolis, among bookmakers. We update these betting lines in real-time so you’re always up to speed on the big race.

Bets come in bunches in NASCAR races, whether it’s Indy or another venue. Now you don’t have to bet them all, but you should at least know the differences between all the available NASCAR Vegas odds Indianapolis. In case you don’t, here’s what you can expect to find:

Every sport has a moneyline bet, where you pick who wins outright and that’s it. NASCAR’s version of the moneyline is the race winner. The whole racing field — all 40-plus of them — will have their own odds of winning the Brickyard 400. Due to that large field, odds will be lopsided across the board. Heck, even the favorites have plus-money odds. That’s just the crapshoot nature of the race winner, a bet where anything can happen.

Randomness is less of a factor in driver matchup wagers. That’s mainly because the betting field here is far smaller. Either it’s only two bettable drivers (dubbed a head-to-head wager) or four (group). As a bettor, the purpose here is to pick who among the matchup places higher in the final leaderboard.

Where do we even start with props? More or less, props are side bets on in-race outcomes. Unlike say matchups or race-winner wagers, these outcomes don’t necessarily have to be about a specific drivers’ final standing. For instance, props can instead be bets on which driver runs the fastest single lap at Indianapolis or an over/under on times they use a pit stop.

As for futures, they take a completely different approach than the aforementioned bets. The difference being they’re much more long-term wagers. So with a future, you’re not betting on a single event like Indianapolis. Rather, you’re gambling on, say, who wins the NASCAR Cup Series by years end. 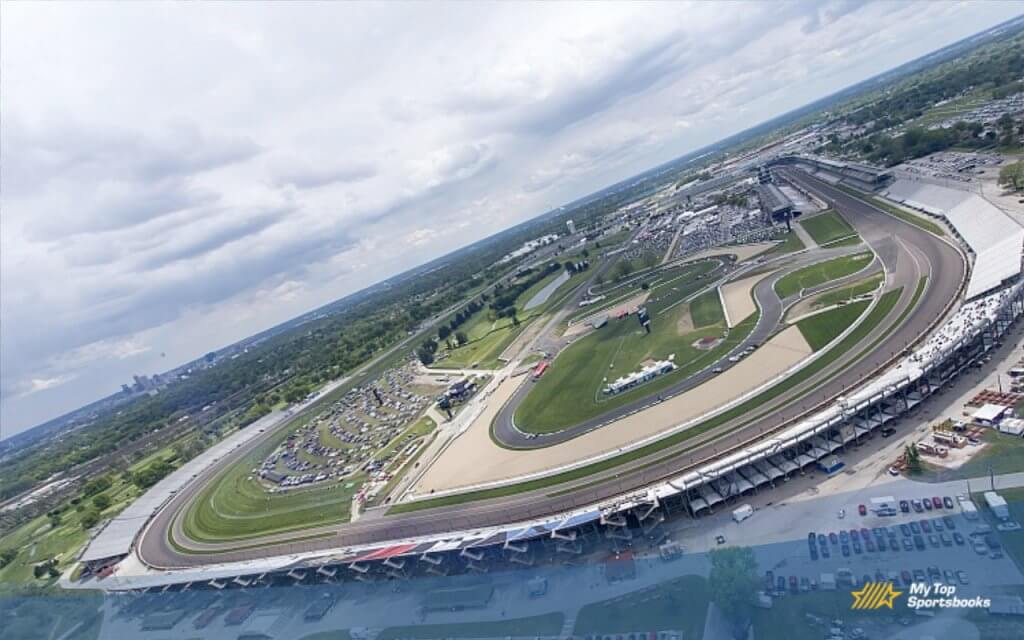 Whenever the Indianapolis Motor Speedway is mentioned, the first thing that pops into most minds is the Indy 500. As it should, after all, the IndyCar event is one of the world’s most-known motorsports races in history. However, the speedway itself is to host other events, and few are bigger than NASCAR’s Brickyard 400. This has been a once-a-year occurrence in the NASCAR Cup Series since 1994. In fact, at the time, it was the first non-Indianapolis 500 race to be held at the venue in close to 80 years.

Immediately what stands out about the speedway is its monstrosity. The Indianapolis Motor Speedway holds the honor for the largest sports venue in the world. And no, the record isn’t just for race venues, it’s for any and all sports venues. Period. A capacity crowd of 257,325 people can cram into the grandstands at Indianapolis. As a comparison, the next-largest facility in the NASCAR rotation is the Charlotte Speedway, which can “only” hold 167,000 fans — or 90,000 fewer than Indy.

The Brickyard 400 NASCAR event previously used Indianapolis’ oval course for the competition. However, that’s no longer the case starting with the 2021 race iteration. Instead, NASCAR is moving the event to the Grand Prix road course, which is part of a larger push in the sport to mix up the racing schedule and locations.

The Indianapolis road course stretches 2.4 miles long and as you’d imagine, has no shortage of turns. In fact, there’s 14 total in the race layout. NASCAR first debuted the track in 2020 for its Xfinity Series, a “trial run” of sorts before its Cup Series implementation. Now? The road track is ready for prime time!

When is the NASCAR Indianapolis race in 2021?

NASCAR has a history of flip-flopping the Brickyard 400 race in its Cup Series schedule. Historically, it was always in August, before NASCAR tried to make it a July fixture. Now it's back on for August 15 come 2021. The start time for the event is earlier than usual at 1 pm EST.

How can I watch the NASCAR Indianapolis event?

NBC will be your go-to for all things Brickyard 400. The network will air the race live on both its TV channel and streaming app, Peacock.

Does NASCAR and IndyCar get along with each other?

This might surprise you, but yes, the two racing organizations are friendly with each other. In fact, the Indianapolis Motor Speedway merges these two worlds together. During the same weekend as the Brickyard 400, IndyCar will also host an event — on the regular course, not the road one like NASCAR. 2021 will be year two of the NASCAR-IndyCar mashup after doing a joint weekend for the first time in 2020.

Which NASCAR driver has the advantage in the Brickyard 400?

Simply put, there's no way of telling for the 2021 race. Like we said before, this will be the first Cup Series event ran on the Indianapolis road course, a change from the oval one previously used. Though, Chase Briscoe did win there in 2020 as part of the Xfinity Series. Briscoe now competes in the Cup Series so at least he has familiarity with the track that others don't.

The difficulty lies in the track layout, whether it's Indianapolis or another road course, they're just more "unconventional" than standard ovals. Road tracks force drivers to not only turn many more times but also turn in different directions — a challenge not present with an oval layout. It's also tougher to build speed at a road track since a turn is seemingly always around the corner.