How To Bet On NASCAR Kansas Races

Kansas, as a whole, gets a bad wrap as a “flyover state” with nothing to do. Welp, that reputation isn’t entirely accurate because for two times out of the year, the state becomes an absolute hotbed for NASCAR racing. For bettors looking to cash in on those two yearly opportunities, this guide is tailor-made for you. We’re going over the must-know details about wagering on races here — the best sportsbooks to do so, current NASCAR Kansas odds, and what gambling options exist.

Any NASCAR betting journey begins with the right bookmaker, keyword being “right.” That word has a different definition to every bettor. Some may want a bookie with second-to-none odds, others may prefer one that offers great promotions. We took both those factors, plus others, into account when creating the below list of top-rated sportsbooks. So if you need a place to lock in bets on the next Kansas race, you should start with these suggestions.

In terms of NASCAR Kansas odds to win, you’ll find them underneath. These lines are current and go for the upcoming Kansas event only.

Popular Types Of NASCAR Bets You Can Place On Kansas Speedway

The table above isn’t the only NASCAR Kansas odds 2021 available. No, there are dozens more due to the different wager types offered on the competition. To clear up any confusion, let’s break down which are the most common and what the differences are between each.

The de-facto Kansas odds NASCAR most bettors latch on to is the race winner (which is what we used in the odds table beforehand). It’s the most bet-on wager and it’s also the simplest of them all — pick the eventual winner. That’s it.

Though, it’s not an easy bet to win on. Take the Busch Name This Race 400, which has over 40 drivers competing on the track. Picking the single winner among the field is like throwing darts, as in not impossible, but a longshot to nail it perfectly down the middle. Those long odds are reflected in the betting lines, which are commonly high for every driver, even favored ones.

Matchup wagers remove a lot of the randomness that the race-winner bet has. That’s because in this wager, the betting field is much more narrow — either two drivers (also called head-to-head matchup) or four (group). Moreover, you’re not betting that a driver is necessarily winning the entire event, only that they’ll place higher than the other driver(s) featured in the matchup.

Bookies will select the drivers to participate in the matchups ahead of time, usually based on current storylines or rivalries. An option for bettors to hand-pick what drivers to put in a matchup bet is incredibly rare.

Think of props like side bets. This wager can be placed on a litany of things, which is where the fun lies. A favorite prop among NASCAR bettors, especially at a speedway like the one in Kansas, is the fastest lap. As the name implies, you’re picking which driver blazes the fastest single lap all race long. Props such as this one, plus many others, have nothing to do with the final result of who wins and who places where. It’s that reason why bettors cling to props since money can be made well before the final lap.

The prime example of a futures bet is who will win the NASCAR Cup Series. A long-term wager like this can be made at any point in the NASCAR race season, whether that’s preseason or before a Kansas Speedway competition or up into the playoffs. Though, betting odds will differ greatly at all these different times based on season-to-date results. 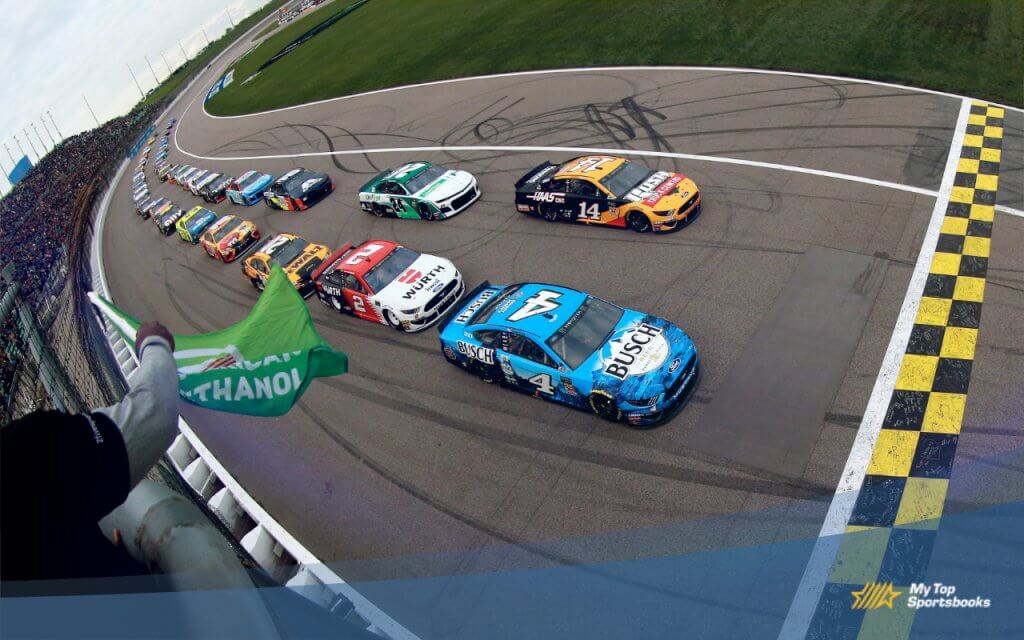 Located in Kansas City (on the Kansas state border, not Missouri), the Kansas Speedway is an annual pit stop in the NASCAR Cup Series. In fact, the track hosts two separate events each year — Busch Name This Race 400 (how’s that for a sponsor name?) and Hollywood Casino 400 come playoff time. The latter race is the third-to-last race in the entire NASCAR season, part of the round of 8 stage.

The course is one of the fastest in the entire NASCAR circuit, perhaps a top-10 if we had to rank it on pure velocity. It’s a 1.5-mile tri-oval that features progressive banking between 17 and 20 degrees, whereas the front straighways are nine to 11 degrees and back straightway are five degrees.

If we’re being honest, the Kansas Speedway is one of the most overlooked tracks in all of NASCAR. Opened in only 2001, it doesn’t have the prestige of old-timer tracks but at the same time, also lacks the new-course amenities of recently-built speedways.

What days are the two Kansas Speedway races in 2021?

NASCAR comes into Kansas City for the first time on Sunday, May 2 for the Busch Name This Race 400. It then returns for the Hollywood Casino 400 on Sunday, October 24.

How can I watch the Kansas Speedway events?

Fox Sports 1 will live air the Busch Name This Race 400 on its traditional TV channel and streaming app. However, coverage switches to NBC Sports Network for the Hollywood Casino 400, where it too will broadcast it on TV and its over-the-top-streaming app.

What current NASCAR drivers have won the most as Kansas?

There’s a five-way tie for most all-time wins at the Kansas Speedway, each with three victories apiece. Three of the drivers on the list remain active in NASCAR and include Denny Hamlin, Kevin Harvick, and Joey Logano.

Who should I bet on to win the Kansas race?

Ah, yes, this is the million-dollar question. While we can’t predict the future, we can say that history tends to repeat itself at the Kansas Speedway. Of the 30 or so races in the track’s history, there have been 10 different drivers that have won the race multiple times. So betting-wise, perhaps stick with drivers that have proven they have a good handle on the course.

How does NASCAR Round of 8 playoff work?

As we said before, the Hollywood Casino 400 event is a round of 8 playoff race, the second of three in the crucial stage. From this point, only four qualify to the championship finale. If a driver that is already top eight in season points wins at the Kansas Speedway, then that driver automatically advances to the title race.