How To Bet NASCAR Nashville Race

Online sportsbooks are dime a dozen these days, but truly-elite bookmakers are much harder to come by. The betting sites below definitely fit into that latter category thanks to solid prices on NASCAR betting and other bettor-friendly features. Explore the table below to get your gambling fix.

Before you even think about wagering on the upcoming Nashville race, it’ll pay to see what prices each driver is getting to win it all. Included below is the latest Nashville betting odds, at least among the top contenders. The full race field includes more than 40 drivers, but these are the front-runners to claim the victory.

Popular Types Of NASCAR Bets You Can Place On Nashville Superspeedway

There’s more than one way to bet on the Nashville race. Matter of fact, there are several and each differs from one other. We’ve gathered the four wagers you’re more likely to come across at a bookie.

It doesn’t get any more straight-forward than this bet — who’s going to win at Nashville straight up? That’s all there is to this bet. Every single driver has a betting line, most of which will be steep. We’re talking plus-money odds all-around steep.

This might be a good opportunity to explain how wagering lines even work. Say the favorite to win the Ally 400 event has a +325 line. The number is a hint to how much you stand to win on a correctly-placed bet. For instance, a $100 on the winning driver would return a total profit of $325. Not a bad payday, eh? While the race winner bet is tough to hit on, its potential earnings are also unmatched.

Matchups are much more orderly than race winner bets. Instead, this wager focuses solely on how pre-picked drivers will fare compared to each other. Matchups can be placed between two cars (dubbed head-to-head) or four (group). The bookies will pick the matchup field ahead of time, mostly based on in-season rivalries and storylines. The performance of drivers not included in the matchup ticket has zero effect on the bet outcome.

Prop bets open up the wagering possibilities well beyond who wins or who places where. Noteworthy examples of props include how many caution flags are thrown, over/unders on the number of lead changes, or whether a certain driver will crash. Some betting sites support prop bets better than others, so keep that in mind when selecting a bookmaker to gamble at.

While the aforementioned bets are very concentrated on the Nashville event, futures are less so. As the name implies, these wagers instead concern themselves with future outcomes — most notable, who wins the NASCAR Cup Series championship? Futures can be bet on at any point in the year, whether that’s preseason, mid-season, or even into the playoffs. Just know, however, that betting odds for futures are constantly in flux based on recent events like wins, standings, or injuries. 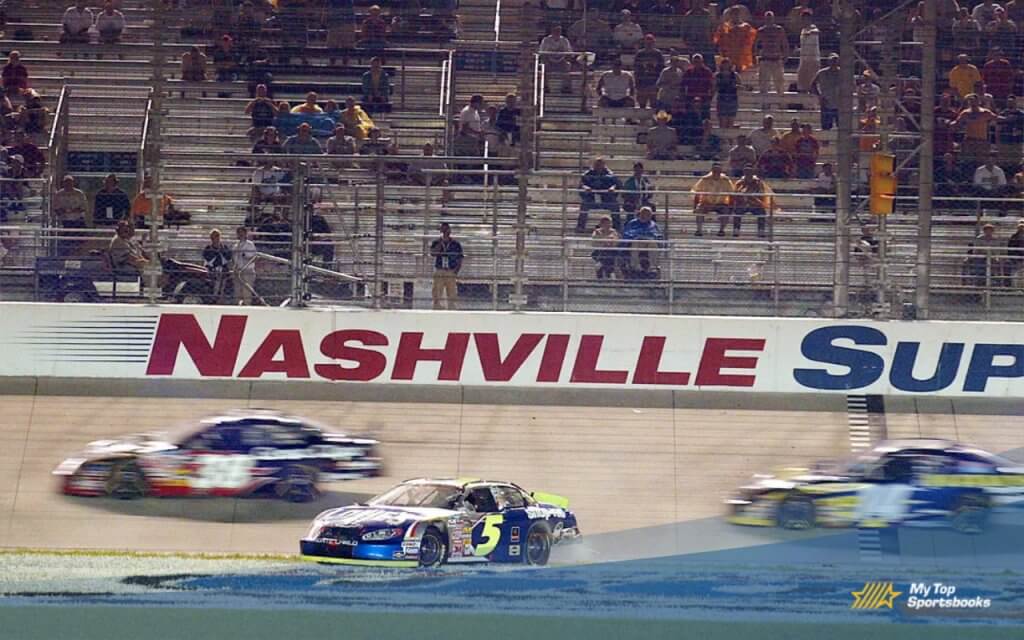 To give the sport a shot in the arm, NASCAR made sweeping changes to its 2021 Cup Series schedule. Additions include more road courses, a dirt track, and first-time venues — one of which includes the Nashville Superspeedway (replacing one of the Dover International Speedway events). Ally 400 will be the namesake of the history-making race in Nashville. NASCAR’s schedule flip gives the state of Tennessee a third race on the calendar to go along with its pair of competitions already at Bristol.

Nashville’s complex has existed since 2001 and previously held NASCAR Xfinity and Truck Series events. Though, NASCAR’s relationship with the “Music City” predates that, as Nashville was a stop in the Cup Series between 1958 and 1984 at the ‘ol Nashville Fairgrounds. So think of this like two old flames rekindling their one-time fire.

As for the superspeedway, it features a 1.33-mile D-shaped oval with 13 degrees of banking. Time will tell, but the Nashville course could shape up to be one of the NASCAR circuit’s speediest tracks. Maybe not on the level of Daytona, but in that second tier alongside Charlotte or Atlanta’s speedway.

History will be made on Sunday, June 20. The green flag for the first-ever Cup Series race at the Nashville Superspeedway is at 3:30 pm EST.

How can I watch the Nashville race?

This will be the first NASCAR race of the year carried on NBC Sports Network. Every competition beforehand airs on FOX channels. However, NBC starts its NASCAR slate with Nashville, which it will air live on TV and its streaming app, Peacock.

Who should I bet on to win the Nashville race?

That’s tricky since there’s not a lot of history at the course. If anything, you should start your betting list with drivers with a knack for success at speedy tracks like Daytona, Talladega, amongst others. Those high-velocity venues are more similar to Nashville than not.

What other tips do I need to know when wagering on Nashville?

One betting tip that goes for any NASCAR race is expect the unexpected. Seriously. There’s a lot of randomnesses associated with any race and you should plan for things not going to plan. That means not blinding betting on the favorites and also hedging yourself by spreading money around to several drivers. Don’t — and we mean don’t — put “all your eggs in one basket” or in this case, all on one car.

When is a good time to make a futures bet?

There is no right answer to this. However, we think it would be smart to take a “wait and see” approach to futures betting. Get a grasp of the drivers early in the season before committing any big money to who will win the NASCAR Cup Series. It pays to be patient in betting.