The best game of Friday’s NBA lineup features the Phoenix Suns (17-10) looking to steal a win from Oracle Arena when they take on the Golden State Warriors (17-13), at 10:30 PM ET. 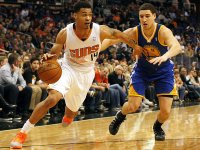 The Suns haven’t played since smashing the Lakers on Monday, but they have won eight of the last nine games, and have looked as a young team hungry for wins. “We don’t know any different,” Phoenix veteran Channing Frye said of his young team. “We like winning.”

Phoenix has made at least 12 3-pointers in five of the last six games. They’re among the league’s best at 38.4 percent; curiously Golden State is even better at 40.3.

“These stretches that he gets on, I don’t know if there’s many guys in the league that can do that,” coach Jeff Hornacek said about Gerald Green who has scored 16 3 pointers in the last in the last three games.

The Warriors beat the Clippers on Christmas Day; it was a hard battle with lots of elbows and ejections, but at the end Golden State came on top 105-103.

“It starts with Steph,” coach Mark Jackson said about Steph Curry. “He didn’t have his best shooting night, but did a great job down the stretch making plays. … He was facilitating and not turning over the basketball, and that was contagious.”

Phoenix is 2-5 ATS in its last 7 games when playing on the road against Golden State.  The NBA odds have the Warriors as 5.5 point favorites for this one.