The Kobe-less Los Angeles Lakers have found a good rhythm since their star player Kobe Bryant has missed several games; they will try to give the Spurs another beating just like last week when they meet this Tuesday at Staples Center at 10:30 PM ET. 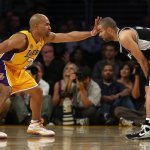 Bryant is expected to miss his sixth straight game on Tuesday night, but his team has won their last four games in a row, and it seems like they have found a way to look productive without Kobe.

The Lakers smashed San Antonio 98-84 last Wednesday with a great performance by Metta World Peace who had 26 points. “They played great and beat us to death,” Spurs coach Gregg Popovich said. “There’s nothing else you can say about it.”

“Metta, Andrew, myself, we all feel we have to step up in Kobe’s absence,” said Pau Gasol, who’s averaging 22.0 points in his last five games. “A different guy can do it every game.”

However, the oddsmakers really don’t care much about that game, and currently have the Spurs listed as 3-point favorites versus the Lakers; the game’s total is at 199.

“We understood the situation; we got the comfortable lead and Pop made the call,” Duncan said. “It was the right call. Our main focus is to be healthy and have our legs.”

“We’re in the run for it. We’re going to do our best to try to win the West, but it’s not going to break our hearts if we don’t. We want to be healthy more than anything.”

The Spurs are trying to get the first seed in the western conference; I think they will win but won’t cover.