The Miami Heat caught fire on Sunday night and ended crushing the San Antonio Spurs in game 2; now the series is even at one. Game three of the NBA Finals is this Tuesday at 9 PM ET at the AT&T Center. 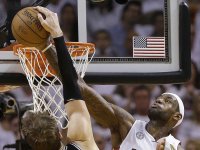 In game two Mario Chalmers was the x factor, scoring 19 points; Lebron James had a rough first half and dropped 17 points.

“Honestly, for me, when I was struggling offensively, my teammates continued to keep it in range,” James said. ” And we even had a lead at one point, especially late in the second quarter when we made that run, and I was struggling a little bit.

“So I think Rio more than anybody kept us aggressive, him getting into the paint, him getting those and-ones and making a couple of 3s. It allowed me to sit back and wait for my time.”

Danny Green scored all his five 3-pointers, and scored 17 points for the Spurs, but they just couldn’t keep up with the Heat rally that at one point, it was a 35-3 blowout.

“In the second half they just run us over,” the Spurs’ Manu Ginobili said. “We didn’t move the ball at all. Their pressure really got us on our heels.”

“We didn’t play well. We didn’t shoot well. I know I played awfully,” Duncan said. “Whatever it may be, they responded better than us. So hopefully we can look forward to this Game 3 and regain some of our composure.”