The San Antonio Spurs will have the entire arsenal ready (Tim Duncan, Tony Parker and Manu Ginobili) to face the Kobe-less Lakers, this Wednesday at 8:30 PM ET at the AT&T Center.

Oddsmakers have the Spurs listed as 10-point favorites versus the Lakers, with the game’s total at 202½.

Los Angeles beat New Orleans 93-91 the last time they were on the court, and failed to cover the four points on the spread. The Spurs lost 91-84 against the Utah Jazz, but Duncan, Parker, and Ginobili were not in it.

Kobe Bryant is the NBA’s leading scorer at 28.1 points and will miss his third straight game with a sore left shin. “It’s OK that it’s taking time for him to get right,” coach Mike Brown told the team’s official website.

“I’m one of the anchors — when (Bryant) is not there, even more –, so I get a lot more involved in the offense,” said Gasol. “I’m not trying to be the main guy here. We have a great team and some great weapons. … I just picked up a little bit the role of scoring and being aggressive offensively just because, obviously, the absence of the top scorer in the league.”

The Lakers will need to have a bigger effort than the one they did against the Hornets. Before the loss against the Jazz, the Spurs have won 11 straight, and seemed to have the best momentum of the entire NBA; they are 7-0-1 ATS in its last 8 games at home.

My pick: Take the Spurs to cover. 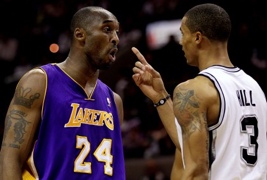