The Dallas Mavericks and the Los Angeles Lakers will clash in one of the most important games of the season as both look to get the eight spot in the Western Conference playoffs.  The game is this Tuesday at 10:30 PM ET. 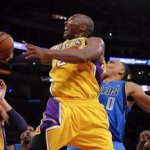 The Lakers and Mavs are separated by one game, and both continue to fight against Utah, Golden State, and Houston for that eight spot in the playoffs.  A win will be crucial for any of the clubs.

Los Angeles beat the Kings 103-98 on Sunday night. “What a journey,” said Kobe Bryant, who now is the fourth best scorer in NBA history. “It’s been a very, very long journey. I’m certainly extremely appreciative of all the support of the Laker faithful, the Laker Nation.”

“I thought that was key — those 23 seconds. Otherwise he would’ve been tired,” coach Mike D’Antoni said, sarcastically about Bryant. “He just looked at me and said, ‘I’m not coming out tonight.’ Sounds good to me.”

The Mavericks beat the Bulls also on Sunday, but earlier. Dallas trailed by 12 in the fourth quarter, but Dirk Nowitzki got them back to the match and had a last second winner.

“This game was kind of like the story of our season,” said Nowitzki, who finished with 35 points. “Every time someone writes us off, we find a way to come back.”

The series between the Lakers and Mavericks is 2-1 in Los Angeles favor.