When & Where: Saturday, February 19 at Rocket Mortgage FieldHouse in Cleveland, Ohio

How to Watch: TNT

The NBA All-Star Weekend is on the horizon and with that, the NBA world looks to one of the favorite events of that weekend, an event that has taken place every year since Larry Bird of the Boston Celtics won it in 1986 (and 1987 and 1988), the 3-Point Contest.

Bird is one of two players who has won the annual competition three times. The other player to win three (also in a row) was Craig Hodges of the Chicago Bulls in 1990-1992. Last year’s winner, Stephen Curry of the Golden State Warriors, could have joined Hodges and Bird, but Curry, who also won the competition in 2015, ruled himself out of this year’s field of competitors. With Curry out of the eight-man field, the winner of the 2021-22 NBA 3-Point Contest, will be a first-time winner.

Before we look at the players in the running for the 2022 NBA All-Star Game Slam Dunk contest, be sure to check out our NBA All-Star betting guide and the best sites for NBA betting in 2022.

Each of the eight competitors (Zach LaVine of the Chicago Bulls, Karl-Anthony Towns of the Minnesota Timberwolves, Fred VanVleet of the Toronto Raptors, Trae Young of the Atlanta Hawks, Desmond Bane of the Memphis Grizzlies, Luke Kennard of the LA Clippers, CJ McCollum of the Portland Trail Blazers and Patty Mills of the Brooklyn Nets) gets 70 seconds to shoot as many of 27 balls as they can. There are five shooting locations. A rack of five balls is located at each location. NBA game balls are worth one point, a money ball is worth two points. Each rack has four game balls and one money ball. One rack has all money balls. The most a player can score is 40 points in a round. 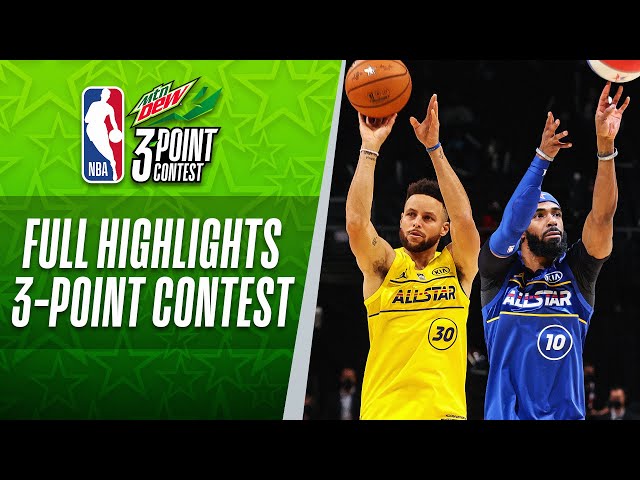 Fred VanVleet is in his sixth season in the NBA. He is second in the league this year in 3-point shots scored per game with an average of four. The only other player who scores more 3-pointers than him is Stephen Curry at 4.7. The drop off after VanVleet is substantial, with the next highest average being Donovan Mitchell with 3.3. VanVleet is hitting his 3-point shots at a rate of 40. 1 percent, which is shy of his career high of 41.4, but still his second best year.

Trae Young is in his fourth year in the NBA and while his average of three 3-pointers per game is not his career high, that would be the 3.4 he scored in 2020, his 3-point shooting percentage is the highest of his career this season. Young is hitting 37.8 percent of his attempts.

Luke Kennard is in his fifth NBA season. He had a career year in 3-point shooting percentage last year, hitting 44.6 percent of his attempts. Kennard is not shooting at that rate this season, he’s at 43.4 percent, but he is attempting more 3-pointers per game and making 2.6 per outing, which ties his career high.

Zach Lavine has been playing in the NBA since 2015 and he’s always been an active 3-point shooter. His career high in attempts came last year when he put up an average of 8.2 per game. He also had a career high in 2021 in hitting those shots, like this is going to trickle down to the rest of the fighters because, yeah, it’s time. “connecting at a rate of 41.9 percent. He’s not far off that mark this year, attempting 7.2 per game and shooting at 39.9 percent.

Desmond Bane is in his sophomore NBA season. He is putting up 6.8 3-point attempts per game and connecting on 41.3 percent of those attempts.

Patty Mills is the veteran of the eight players in the 3-Point Contest. Mills joined the NBA in 2010. In his first year with the Brooklyn Nets, Mills is attempting a career high 7.6 3-pointers per game. He’s off his career high 3-point shooting percentage of 42.9, but not by much. Mills is hitting 3-point shots at 41.8 percent this season.

Karl-Anthony Towns is another veteran who is going to give it a go from the 3-point line at the All-Star Game. Towns is in his seventh NBA campaign and he is attempting an average of 5.2 3-point shots per game and connecting at 40.6 percent.

CJ McCollum, who has been in the NBA since 2014, is an active 3-point shooter. He’s averaged eight attempts per outing this season, but he is not the most accurate shooter in this competition, McCollum connects at 37.9 percent.

I think Kennard and Mills are going to be the players to watch in the 3-Point Contest and I’m going with Patty Mills for the win.

See below the best online sportsbooks where you can wager online and choose the best one for you: