A solid 49-33 regular season turned into a disastrous 0-4 playoffs for the Toronto Raptors, as they were swept by the Washington Wizards in the first round.

With the mood in Toronto decidedly sour right now, we thought we’d take the chance to reflect on some of the positives – and there were many positives – from the Raptors’ 2014-15 campaign.

Without further ado, here are our top-five most memorable moments from the Raps’ year:

(#1). Lowry and DeRozan “Steal” One Late in Boston

In just the fifth game of the season, Toronto was in Boston. The Raptors trailed by 16 midway through the second quarter, but led for most of the fourth. With the game tied at 105 and less than a minute to go, Kyle Lowry’s steal and dish to DeMar DeRozan for a dunk punctuated an exciting win that gave the team a 4-1 record. 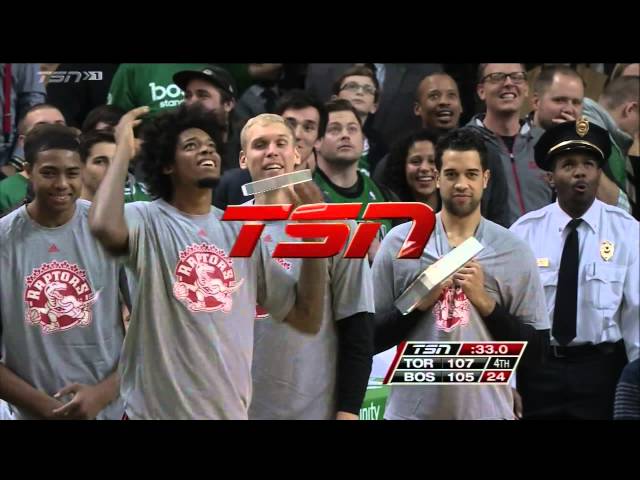 The Raptors were hot in November, and nobody was more of a surprise than Lou Williams. Traveling to heavyweight Cleveland on November 22, the Cavs led 26-8 early. But Williams scored a dozen points during the final six minutes of the first quarter, hit a second quarter buzzer-beater to give Toronto the lead, went 15 of 15 at the freethrow line, and finished with 36 points as the Raptors came back to win 110-93. It was games like this that earned Williams the NBA’s Sixth Man of the Year Award.

On November 26, the Raptors traveled to Atlanta and beat the Hawks 126-115. It was the sixth straight win for Toronto and improved their record to 13-2. DeRozan scored 27 points in the win while Lowry added 14 points and 13 assists. Williams had 22 off the bench and Greivis Vasquez tallied 21 points in 17 minutes. Though the Hawks weren’t the juggernaut they would become later in the year, looking back, this win was one of the best of the year for the squad.

On December 19 in Detroit, the Raptors beat the Pistons 110-100. Despite being on the road, it was a primarily Raptor crowd, with Canadian flags being waved and chants of “Let’s Go Raptors” easily audible. It was the closest an NBA arena has ever been to a de facto war zone. On the court, tempers flared after James Johnson posterized Andre Drummond.

Two nights after Christmas, it appeared Toronto might be the best team in the league. Playing in L.A. against the 20-10 Clippers, the Raptors won 110-98 in a contest that saw Lowry (25 points, seven assists) outplay Chris Paul, and Jonas Valanciunas (22 points, 11 rebounds) get the better of DeAndre Jordan.

It’s wins like this that should keep the Raptor faithful positive through what is sure to be a long off-season. When the Raptors were healthy and in rhythm, they proved they can bang with the biggest and best the Association has to offer. If management can keep the core of the team together in 2015-16 and that core can stay healthy (both of which are big ifs), “You the North” have every reason to be confident heading into next season.