The more pressure you put on him, the bigger he gets; that’s how much Kevin Durant enjoys playing great basketball in the fourth quarter. His Thunder will look for a second win in the NBA Finals when they face the Miami Heat, this Thursday at 9 PM ET at Chesapeake Energy Arena in OKC.

Durant scored 17 of his 36 points in the fourth quarter of the Thunder 105-94 win over the Heat in game one of the finals, and he was virtually unstoppable whenever he took a shot, just as he was in the series against the San Antonio Spurs.

“Well, those guys, they came out on fire. They were passing the ball well, knocking down shots. We just wanted to continue to keep playing,” Durant said. “It’s a long game, and every time our coach was just saying, ‘Play harder, play harder,’ and that’s what we did.”

Durant and Russell Westbrook scored 41 points together alone in the second half of the game, the entire Heat roster scored 40. “Honestly, I think we just came out with a lot more intensity on the defensive end. Made them feel us a little bit,” Westbrook said of the second half, when the Thunder outscored the Heat, 58-40.

Lebron James scored 30 points and Dwayne Wade 19, but Heat was unable to stop Durant and Westbrook. “They just made more plays than us,” Wade said. “They got a couple offensive rebounds that kind of hurt us. Got a couple of open shots and from that point we were kind of playing from behind.”

OKC is -4.5 favorites in the NBA betting odds for game two, and I would take them to cover, considering there is no one who can guard Durant in this series. 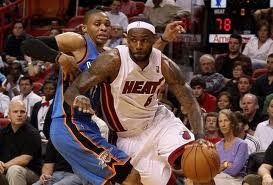