The New York Knicks did what they had to do, but now they need to steal one from Indiana as they face another elimination game this Saturday at 8 PM ET at Bankers Life Fieldhouse. 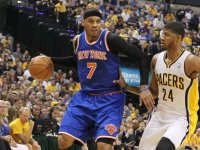 The 85-75 win over the Pacers on Thursday was a good set up for the Knicks in would be the biggest game in the season this Saturday. “Tonight it was just one of them days where you just got to leave it out there on the basketball court,” Carmelo Anthony said.

“I was totally impressed because we met the challenge,” Knicks coach Mike Woodson said. “I think as a coach you come into games like this and you want to see who’s going to step up and make plays, and I thought we did that tonight. We were the better team in terms of doing that.

Anthony scored 28 points, and J.R. Smith and Chris Copeland had 13 points each for the Knicks.

“We didn’t play well,” forward Paul George said. “It was a bad game for us, but we were still right there. A couple of plays where with maturity and growth, we’ll get better at executing the plays our coaches draw up for us. They took us out of our game a little with their pressure.”

The Pacers went into the Garden without George Hill who suffered from a concussion.  “It’s a big loss,” George said before the game. “George (Hill) can cover three positions. That’s where we’re going to miss him the most, on the defensive end. But we have faith in D.J. He’s been more aggressive in the playoffs than he was in the regular season. He’s looking for his shot. He’s looking to create now.’’

The Pacers are 4.5 favorites for game six on Saturday.