The Boston Celtics would love to end the Miami Heat’s winning streak more than anything in the world; well, they will get their chance this Monday night at 8 PM ET at TD Garden. 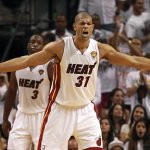 After Miami’s 108-91 win against the Raptors on Sunday, the Heat has gone 22 wins in a row. This, by the way, has made Shane Battier the only player in NBA history in two 22-win streaks (Houston 08).

“I think the biggest thing for our team was watching the Super Bowl and getting away from basketball in a sense and just enjoying each other,” Dwyane Wade said. “We got the famous speech from Shane Battier, and we’ve been rolling ever since.”

Battier’s words? “It was after watching the Super Bowl. It was a good game; we had a great time. I guess the main focus was that you’re going to miss me when I’m gone.”

That’s all cute and stuff, but Boston is all about business lately.  They hate the Heat and will love to end that streak in a heartbeat.

Seven of the last 10 games between Miami and Boston have gone OVER the total.