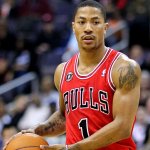 With so many questions surrounding the Chicago Bulls (13-8, 3-5 home), head coach Tom Thibodeau has to like what he saw from his squad on Wednesday night when the team ended its three-game skid by beating the Brooklyn Nets, 105-80.

Derrick Rose had 23 points and five other players scored in double-figures. It was the defense that stole the show, though, holding the Nets to 29 points in the second half.

Thibodeau said, “They came out with a lot of energy. They got us back on our heels. I liked the way we responded in the second half.”

Of course, the talk in Chicago – and around much of the NBA – centers around the health of Rose.

After missing the better part of the last two years, the 2010-11 MVP has struggled with a rash of different injuries this season, leading some to question whether he would ever get back to his MVP form. Don’t count Rose among the doubters, though.

“You all are going to be surprised by the way that I am playing,” Rose said. “Just give me a little minute. I know where I am going to be. I know how good I am, and I’m very confident with my craft and how good I am. Period. My body is healthy. Mind is good, spirit is good, just trying to keep it going.”

That’s good news for the Bulls because their defensive standout Joakim Noah (last year’s NBA Defensive POY) is out with an ankle injury and, tonight, the Bulls will face the extremely dangerous Portland Trail Blazers (17-5, 7-3 away).

One has to figure the Northwest Division leaders will be testy, having lost to Minnesota (90-82) on Wednesday (giving the T-Wolves just their fifth win of the year).

The loss ended the Blazers’ five-game win streak, and the 82-point output was the lowest by the team all season. Point guard Damian Lillard was good in the loss, scoring 23 points and adding seven boards. But most of the team fell asleep in the middle part of the game, as Portland scored just 16 points in the second quarter and 15 in the third.

Lillard said, “We kind of were just like, ‘We’ll fix it, we’ll fix it.’ And they just kept doing it. So it was just a matter of them out-competing us for most of the game until we actually made a run.”

The usually reliable LaMarcus Aldridge, who leads the team in scoring with 21.7 PPG, had only ten points on the night. He said, “We’ve got to bounce back from it. We didn’t shoot the ball well. Hopefully, the next game it will come back to us.”

Though Noah is out, both teams boast solid defenses, especially the Blazers (who give up just over 95 points per game), which means the under (200) is the play.