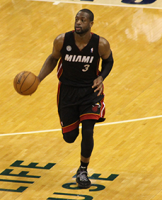 The last time the Miami Heat (40-29, 17-16 Away) were on the court, they notched arguably their best win of the season by hammering the Eastern Conference leading Cleveland Cavaliers.  The Heat will look to keep the momentum going when they visit the New Orleans Pelicans (26-43, 18-16 Home) tonight at the Smoothie King Center (7:00 PM Eastern).

Miami saw five players score 16 or more points against the Cavs on Saturday as they led Cleveland wire-to-wire (122-101). Dwyane Wade led the team with 24 points, while Hassan Whiteside added 16 points and 13 rebounds off the bench.

That was the tenth game in a row in which Miami reached triple-digits, a marked turnaround for a team that averaged well under 100 PPG at the All-Star Break. The offensive explosion has largely coincided with the addition of Joe Johnson in February. The forward is only averaging 12.3 PPG for the season, but he’s upped that to nearly 16 PPG in 11 games with Miami.

The win on Saturday moved the Heat 11 games above .500, and they now sit third in the Eastern Conference and are tied atop the Southeast Division with Atlanta. Yet, the team hasn’t won back-to-back games since they had a five-game win streak snapped in early March.

Though Miami has been thoroughly average on the road this year, they’ll have a great chance to leave New Orleans with a win. The Pelicans have effectively waved the white flag on their season. Currently, 8.5 games back of Dallas for the 8th seed in the West, the team recently shut down star center Anthony Davis for the season (torn labrum).

New Orleans is 2-5 ATS in its last seven games, overall, and 3-5-1 ATS in the last nine against Miami.