Despite losing in the NBA Finals to the Dallas Mavericks the Miami Heat are still atop the heap in off-season NBA betting futures.

Though the chances of seeing an NBA lockout increase almost daily, there is still some value to be had betting on a Champion this far in advance. 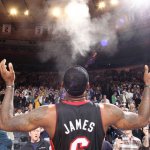 The Heat (+250) haven’t shown a lick of value since the signing of Lebron and Bosh last season as money continues to pour in on the south beach trio, and I don’t anticipate it stopping.

One of the most surprising numbers from the current futures list is the defending NBA Champion Dallas Mavericks, who currently sit at a shocking +900 to repeat next season. Almost 10 to one odds on a defending Champion has me licking my lips.

Two not-so-surprising lines are for both the Chicago Bulls and the Los Angeles Lakers, two teams that looked poised to win their conferences late in the season and are both currently sitting at +500.

The Lakers were swept out of the playoffs by Dallas last season, and have lost their legendary coach for this year – yet again we see a public team with little or no value in a futures wager. The Bulls are a tad more reasonable at five to one, but could become less and less if their early season results are good.

The call here? Leave the Lakers and Bulls alone,  run screaming from Miami and set your sites on the defending champs, repeats are the norm in the NBA, and to get a defending champ almost twice that of a team the swept in the playoffs is money in the bank.

Here are the rest of the top ten teams for NBA Championship winning odds: