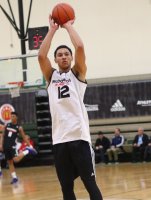 The Ben Simmons sweepstakes (aka the 2016 NBA Draft) is scheduled for June 23rd at the Barclays Center in Brooklyn. The athletic freshman from LSU is a significant, if not overwhelming, favorite to be the first player selected.

In what is rated as a below-average draft class, Simmons is one of the few entrants with the potential to excel at the next level. The native of Australia is 6’10, has good shooting range, and can dribble-drive to the basket. And at just 19 years old, he still has room to grow (perhaps literally as well as figuratively).

If Simmons sees his draft stock fall for some reason, Duke’s Brandon Ingram is next in line. Also a freshman, the 6’9 Ingram has a similar skill set as his Aussie rival. Some argue that he has the potential to be an even better scorer. He’s 6’9 and only 195 pounds. If he adds bulk to his frail frame, his overall game could become elite at the highest level.

Dragan Bender of Croatia, a seven-footer currently playing in Israel, is also generating some buzz as a possible top pick. He is another tall, lean body with the ability to go inside and out.

After Simmons, Ingram, and Bender, there’s a significant drop in the odds to be the first overall pick, but Providence’s Kris Dunn and Utah’s Jakob Poeltl should also hear their names early on draft day.

Below are the current odds for first overall selection. We also break down the odds of which bottom-feeding teams end up with each of the top prospects.

Of course, ping-pong balls determine draft order so these odds may take a drastic turn once fate has had its input.

Odds on which player the following teams will take in the first round: