The eligibility rules around the NBA Draft have taken a beating from every angle since the notorious “one and done” rule first came into effect back in 2005. At least the NCAA and NBA are taking steps to make players choices to stay or go easier this year.

By allowing players up to ten days until after the NBA Combine to withdraw their names from the draft, unsure prospects can see what their stock is like and possibly end up returning to school the following year. It adds an extra element of intrigue to the build up, because a few highly-touted prospects (**cough** Skal Labissiere **cough**) might be trending in the wrong direction.

Still, the “one and done” rule (which requires players to be a year removed from high-school in order to be draft eligible) will be systematically attacked in the coming weeks as high-schooler Thon Maker makes a case that he should be eligible for this year’s draft. The 19-year-old Sudanese-Australian player still attends Orangeville Prep (a Canadian high school) but argues that he graduated last year and that his “victory lap” should count as a post-graduate year. If his wish is granted, it could have a big impact on how the first-round shakes out.

Speaking of the first round, there was a disappointing lack of movement in mock drafts following this year’s NCAA Tournament. With most top prospects bowing out in the Sweet 16 or earlier, the only big name to really boost his stock was Oklahoma’s Buddy Hield. The public is still torn on whether he’s a true impact pro or just a “college player;” but in a draft that seems to be lacking true stars, Hield may be tough for teams to pass on.

Odds to be selected no. 1 overall:

Stay at the top long enough and eventually you’ll get knocked off. After being a consensus number one for the entire year, enough questions have been raised around Simmons that he is no longer the “safe” option. In an NBA where even big men are developing perimeter games, Simmons has no range. While he might be a freak specimen, the top-two contenders for first overall (Philadelphia and Los Angeles) could both use a versatile wing scorer over another frontcourt player. 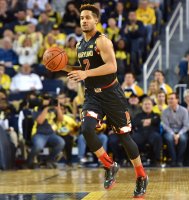 Will this year’s March Madness hero try to parlay his 15 minutes of fame into a pro career? Given how low he was on most boards and Villanova’s chances next year, probably not.

If eligible, over/under on draft position of Thon Maker: 23.5

Over/under on number of international players taken in the first round: 5

Over/under on number of college seniors taken in the first round: 5.5

Odds on which school will have most first round picks:

Odds the 76ers first-round pick gets injured next season: 11/6

First Joel Embiid, now Jahlil Okafor. The 76ers may be cursed with more than just an idiotic front office.

Odds the Celtics trade their first round pick acquired from Brooklyn: 2/1

The Celtics have eight draft picks this year, which is probably too many. No asset they hold is more valuable than Brooklyn’s first round pick, and it will likely be a centerpiece of any offseason deals or moves up the draft this team attempts.