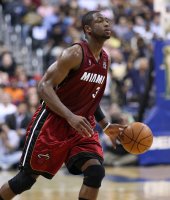 In 2003, Dwyane Wade helped Marquette University reach the Final Four. Since being drafted by the Heat with the fifth overall pick in the draft, Wade has won three titles in Miami and been selected to 11 NBA All-Star Games. After a dozen seasons with the Heat, Wade decided to decline his player option for next season. While Miami is still an option to retain Wade’s services, other teams will work to lure the proven winner, too.

Where should we expect him to land? Let’s take a look at the top contenders for D-Wade’s aging, yet valuable, services.

The Heat are still the favorite to keep Wade at 3/1. The team has a good nucleus with Chris Bosh, Goran Dragic, Luol Deng, Hassan Whiteside, and now Justise Winslow, which should be able to make the playoffs in the weaker Eastern Conference if they can stay healthy. On top of that, Wade is worshiped in the area, and no other team will be as accepting of a 33-year-old in rapidly declining health more than the franchise that he helped to three titles.

Both Los Angeles franchises seem like possible landing spots for Wade. The Lakers, the “marquee” franchise in L.A., have the inferior roster but much more cache than the Clippers. The Lakers are 4/1 to ink Wade and clearly have a bright future with young talent like Julius Randle and DeAngelo Russell. Toss Kobe Bryant in the mix, and the question is: Are the Lakers close enough to winning now for Wade’s taste, or might a more veteran roster be a better fit?

The crosstown Clippers are 5/1 to sign Wade and have the roster to win now. Joining Chris Paul and Blake Griffin should be appealing, but only if DeAndre Jordan is re-signed. That quartet, along with J.J. Redick, Austin Rivers, and Lance Stephenson could very well help Doc Rivers get over the hump in the Western Conference.

LeBron left Cleveland to join Wade in Miami and the two had found tremendous chemistry together, bringing two titles to South Beach and reaching the finals all four years they played together. It’s 12/1 that Wade will return the favor and give the Cavs one more weapon to try to win a championship. Though Kevin Love and Kyrie Irving were out for a lot of key games during the postseason, adding another option on offense – especially one with the playoff pedigree of Wade – couldn’t possibly be a bad thing. Just remember what Paul Pierce did for the Wizards last year.

What if Wade wants to continue his own legacy of building a title team in a place not known for success? The Hawks had a great regular season last year, and could use a guy who wants the ball in his hands down the stretch in games. They don’t have a ton of cap space, but his skill set fits what Atlanta needs, a penetrator who can make mid range jumpers. It’s only 18/1 he goes to Atlanta, but it would be fun to watch.