The New York Knicks will have just their second real challenge in the Jeremy Lin saga as they face the champions, Dallas Mavericks, this Sunday at 1 PM ET at Madison Square Garden.

The Knicks enter the game with Lin as their favorite story, a kid from Harvard that you probably have heard of. Lin has been outstanding, let give him props for that, but his team has played just one good team since he became a regular in the New York’s lineup.

“We were just having fun, and kind of talking about how we’re both excited for when he (Carmelo Anthony) comes back,” Lin said.

“As a point guard, my field goal attempts have been really high, and I don’t think that’s necessarily good,” Lin said. “I think it’s more of my job to distribute and get people in rhythm.”

The Lin story is very cute, ohh yeah it is. However, this kid needs to figure out a way to stop making turnovers – especially now that he will face a Dallas defense that will zone him out, and will create different matchup problems. 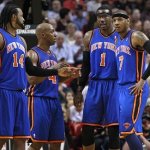 Entering Friday, the Mavericks were on a five winning game streak, all against west opponents. The best thing about them is that it seems as Dirk Nowitzki is back on his regular shooting form. The German had a rough January month, but his level has grown as he now averages 21.8 points per game on February.

The Knicks and the Mavs haven’t faced each other during the season; after this game, they will clash just one more time in Dallas next month.