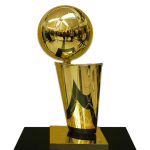 Welcome back to our (roughly) biweekly NBA Title futures update. (The first definition of “biweekly” that is.)

It’s been a busy few weeks and there has been a lot of movement in the odds; however, just like last time, the Golden State Warriors are at the top of the pops. The Warriors were handed their second home-loss of the season by the Chicago Bulls recently – and followed that up with a loss at the dreadful Utah Jazz – but their credentials in the tough Western Conference are still unrivaled.

Meanwhile, the Cavaliers finally look like they’re coalescing and have rattled off ten straight wins. LeBron and company are now breathing down the neck of the Chicago Bulls in the Central Division and sit second in the odds.

The hottest team in the NBA, the Atlanta Hawks, made another big jump this week. They’ve now won 19 straight games, but that’s still only good enough for fourth (directly behind defending champs San Antonio). The fact that they almost lost a huge lead to the 76ers recently didn’t inspire a ton of confidence. But, hey, a win is a win – especially when you’ve put together 19 in a row.

The Bulls, meanwhile, have been dreadfully inconsistent and fall out of the top-five. Their win over Golden State in the Bay was incredibly impressive and, if these odds had come out directly after that game, the Bulls would likely be in the top-three. However, they proceeded to lose games to the Suns and Lakers (of all teams), confusing the crap out of everyone.

Hovering around the middle of the pack are two teams that we still think can make a run: Phoenix and New Orleans (who are currently eighth and ninth in the West, respectively). Most people are expecting tenth-place Oklahoma City to make a run, so it doesn’t look like there’s much room in the playoffs for either the Suns or the Pelicans. But both have proved that they can hang with the top-dogs on any given night, and we don’t think they should be written off just yet.

Below, you can find the updated odds for all 30 teams to lift the Larry O’Brien Trophy come June (plus the odds from last time in parentheses, so you can track everyone’s progress).

(Photo credit: JoeJohnson2 (NBA_Trophy.png) [CC-BY-2.0 (http://creativecommons.org/licenses/by/2.0)], via Wikimedia Commons. Photo has been cropped from its original.)