The Los Angeles Lakers have the difficult task to overcome a five game losing streak against Oklahoma City Thunder, this Friday night at 10:30 PM ET at the Staples Center. 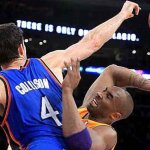 Los Angeles lost against the Spurs on Wednesday despite a great second half effort, and most people are wondering if they will actually be in the playoffs at the end of the season. “We lost five in a row,” Kobe Bryant said. “It’s pretty self-explanatory.”

“No, not really,” coach Mike D’Antoni said. “I’m proud of their effort. They fought. They fought last night against Houston. You can see the team getting some traction, but we’re a long way away from a smile.”

Over the last 15 seasons, just four Western Conference teams started the season 15-20 or worse and made the playoffs.

The Thunder has the second best scoring offense in the NBA and has won three of the last four games, including a double digit victory over the Timberwolves also on Wednesday.

“It was an ugly game early, but I think we were happy we weren’t giving up easy shots and making them score on jump shots over a hand,” Thunder forward Nick Collison said. “That’s what we try and do.”

“Everybody locked in and focused in on Minnesota tonight,” Brooks said. “I was glad they came out, and I knew they would. We’ve always been a team that takes pride in how we play, and they did tonight.”

The Thunder has won eight of the last 10 against the Lakers in any court.