March Madness is around the corner, and both Wisconsin and Ohio State know whoever loses on Sunday will hurt their sitting on the bracket big time The game is at 4 pm ET.

Ohio State’s power offense will try to avoid a major surprise in the game; the Buckeyes average 75.2 a game and enter this matchup after beating Illinois but with some concern that they have dropped two of the last four games on the schedule.

“It was obviously good to see the ball go in early,” Ohio State coach Thad Matta said of the Buckeyes’ hitting 11 of their first 12 shots and 16 of the first 19. “We had good shots, we got the ball moving, and we were able to get out and get some easy buckets because of our defense. That was delightful to see, trust me”. 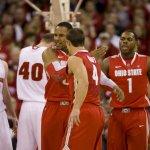 Ohio State already beat Wisconsin on February 4th, but the game was really tight on defense and low scoring. In that game, forward sophomore Jared Sullinger had 24 points and 10 rebounds, but the Buckeyes were awful from the three point line hitting just one from eight attempts.

“I don’t think I saw single coverage since the first part of the season of my freshman year,” Sullinger said after that victory. “When I saw that, I got excited. I decided to go to work.”

Keep in mind, the Badgers have lost three of the last five games; and if they give Sullinger another free pass, this game won’t be that close.