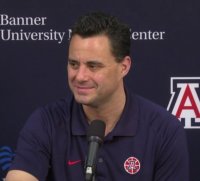 Before the March Madness field was set, I looked at the odds of the longest tournament bid and seeding streaks coming to an end this year. Not to toot my own horn, but I was pretty accurate: I said the odds favored Michigan State, Northwestern, and VCU getting at-large bids, and they all did. I also said there was roughly a 50/50 shot the Big Ten would get a(n undeserved) top-four seed, which it did. (Purdue is no. 4 in the Midwest.) I can’t really call that last one a win, though, since I would have been equally right had it gone the other way.

With the Round of 32 in the books, there are a handful of Sweet 16, Final Four, and national championship streaks and droughts in jeopardy. Let’s take a look at the odds they’re going to end in the next couple weeks.

There’s a very good chance that one of the two most surprising Final Four droughts is coming to an end this year in the West region. Gonzaga and coach Mark Few are half the story. The no. 1 seed is still alive after downing Northwestern – with the help of the officials – and will head into the Sweet 16 as a small favorite (-3) over West Virginia. A matchup with no. 2 Arizona looms in the Elite Eight, however, and this isn’t the same Wildcat team that the Zags beat back in December. Gonzaga has a real shot at the Final Four, but it’s less than even money given the competition that awaits.

Sean Miller is the other half of the aforementioned drought. He’s one of the best coaches in the nation and his Wildcats have been a national power for years. He’s yet to reach the Final Four, though. Zona would be a small dog in a game against Gonzaga, but they caught a break in the Sweet 16 with undermanned Xavier making a surprise run.

Odds a no. 5 seed wins the tournament for the first time: 0

They’re all out! Oops. I wish I hadn’t picked three of them to advance to the Sweet 16.

Odds a double-digit seed wins the tournament for the first time: 99/1

This situation isn’t quite as bleak as the no. 5 seeds. But we’re down to one potential winner: no. 11 Xavier.

When Edmund Sumner went down, Xavier’s offense was placed squarely on the shoulders of Trevon Bluiett. He was banged-up himself this year and couldn’t handle the load initially. Xavier was only able to beat last-place DePaul (three times) down the stretch in Big East play before earning a quality win over Butler in the conference tourney and sneaking into the tourney.

My how that’s changed. Bluiett scored 29 points in the Round of 32 as the Musketeers blew out Florida State. He’ll have to be even better to lead his team past Arizona in the Sweet 16. And that’s just the first step of four remaining. There’s about a 1-percent chance Xavier runs the table.

It’s only happened three times since 1979, and zero times since 2011. With three no. 1s still alive in the Sweet 16, odds are against it happening this year. Gonzaga and UNC both look vulnerable, but Kansas is poised to make a run in the Midwest after blowing out Michigan State, 90-70, in the second round. Purdue won’t have an answer for the Jayhawks talented backcourt in the Sweet 16. In the Elite Eight, they’ll either get an Oregon team missing arguably its best big-man (Chris Boucher) or a Michigan team playing over its head.

Odds there are no true buzzer-beaters in the tournament: 6/5

I couldn’t find accurate information on the last buzzer-beater-less tournament. But it sure feels like we get at least a couple every year. We’re well over half way through the 2017 tournament in terms of number of games, and we’ve yet to see any. There’s still a good shot (pun intended) that we see at least one. The opportunities have been there this year (Princeton, for instance). The shots just haven’t fallen. Plus, now that we’ve gotten rid of the Troys and North Kentuckys of the world, we should see tighter games, on the whole.

Odds an active Hall of Fame coach reaches the Final Four for the tenth straight year: 7/12

You have to go back to 2007 to find a Final Four that didn’t feature one of the active Hall of Fame coaches: Jim Boeheim (Syracuse), John Calipari (Kentucky), Tom Izzo (Michigan State), Mike Krzyzewski (Duke), Rick Pitino (Louisville), Roy Williams (UNC). Though they weren’t all HOFers during this run, my point remains the same: coaching is huge in March. Having one of the elite greatly increases your chances of making a deep run.

Both Williams and Calipari are still alive in the East, and there’s about a 63-percent chance one of them emerges from the region.